Some comfort food for Hamilton? 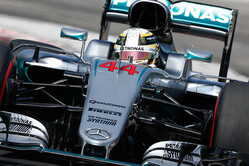 While Nico Rosberg's departure won't cause Lewis Hamilton too many sleepless nights, news that Mercedes technical chief Paddy Lowe is also heading for the exit door is another matter entirely.

Not only has Lowe played a significant role in Mercedes success over the last three seasons, the Briton was also a key player in Hamilton's time at McLaren. Indeed, while most thought Hamilton's move from Woking to Brackley was utter madness and would end in tears, though it was Ross Brawn who sold the basic idea to the driver it was the arrival of Lowe midway though his first season with the team that kick-started what was to follow.

However, a get together at Chez Wolff (The Lair?), appears to have left Hamilton confident for 2017 and beyond.

"We just had an amazing meeting," said Hamilton in a brief video on Instagram. "I just wanted to send on a message to let you know that we are going to be the strongest partnership next year and we look forward to fighting for this championship again."

"We spent a good couple of hours together," added Wolff in a second video, the pair sitting side-by-side. "We had a really fantastic meeting and we will be coming back so strong in 2017."

Sceptics, of which there are many in F1, might wonder who is really trying to convince who… and of what.