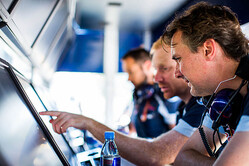 While it is the likes of Paddy Lowe, Adrian Newey, Pat Symonds and James Allison who usually grab the headlines, down at Faenza James Key has been quietly getting on with the job of establishing Toro Rosso, not easy when your sister is Red Bull.

Having begun his F1 career with Jordan in 1998, the Briton rose through the ranks to the role of technical director in 2005. During the Silverstone outfit's subsequent numerous changes which saw it morph into MF1, Spyker and Force India, he continued, eventually leaving in 2010 to join Sauber.

2012 saw the Briton move to Faenza, and despite forever being in the shadow of its Milton Keynes based sister outfit, the Italian team has generally given a good account of itself, and much of this is down to the work of Key. Indeed, he is forever being linked with other outfits, most notably when James Allison parted ways with Ferrari, however, he remains true to the other Italian team.

As he looks ahead to 2017, his sixth year with Toro Rosso, Key is excited, admitting that the new rules have fired his imagination.

"It's a massive change," says. "Honestly, from a bodywork and suspension and tyre point of view, this is the biggest one that I've personally experienced in almost 19 years in F1.

"From a chassis point of view, it's the biggest change of the past two decades, even bigger than 2009 and certainly bigger than 2014. These are exciting times!

"Basically, there are two processes going on," he reveals. "Firstly, you've got the enormous amount of research you have to do to try and understand what makes a car with these new regulations tick, without any experience of them in reality, because for a long time, we can only operate in the virtual world. That process comes to an end in January. Secondly you hit the track for winter testing, after which you go and do a season with all this work that for a long time existed in your virtual world.

"We tentatively started the 2017 project in September 2015, so it's been 14 months so far. Back then, the chassis regulations hadn't been finalised but we thought that with any change of this nature, the sooner you start, the better.

"We knew the tyres would be wider and we had dimensions then of what we were going to work to. These also got refined, but not to a huge degree. We started work conceptually on this around September 2015, really just to see what it meant and then as the regs evolved, we changed our plans accordingly. By the time the car hits the track, it will have been a 17-month project."

Asked if he and his fellow engineers find the changes exciting, the Briton is in no doubt.

"Absolutely," he says. “It's not often discussed - I wish it was more - engineers, particularly in Formula 1, but in any industry where you're working on the cutting-edge of something, are incredibly competitive people. It's why they do this.

"To be given a new challenge with lots of unknowns but knowing that you're up against your peers in every other team to make what you can of it, is a great challenge. It's something that everyone relishes really, in every team.

"It's been really interesting because there are lots of creative minds out there and everyone's sitting down and thinking, "Well, what do we need to do with this? What combinations of this, that and the other are there that make these cars perform? Where are your targets?"

"You've got no reference points from anywhere than your own internal targets. You can get that horribly wrong or you can be on the money. We won't know really until qualifying in Melbourne ultimately. But you've got to go through that whole process of working out exactly what it is that you need to be doing with the '17 car to be competitive. I don't know whether we've done enough and I guess no other team does either, but it's an exciting time, just setting out what you think is right, let alone going into the detail, and then making all sorts of discoveries along the way."

While the days when Toro Rosso could effectively run a Red Bull chassis are long gone, certain synergies between the two teams are permissible and will be taken advantage of.

"There are several areas nowadays where it's acceptable to run the same part or for one team to design a bit and allow the other team to use it and so on, predominantly on power unit-related topics, but it also stretches to gearbox and suspension as well.

"That's all good. It means we can pool our resources a bit more and have better synergies in those areas and certainly, both teams are looking to see what opportunities there are.

"The problem with new regulations of course is you've got nothing to discuss because you've got to go through the whole design process. In 2017 therefore, there will not be that many opportunities for synergies. In the second year of these regs, once you've got bits that work within that set of regulations, then it opens up many more, so 2018 will be a better opportunity. Having said that, having the same engine helps. It draws together a huge amount of commonality in certain areas on the power train side."

And at a time of the year when most of us are winding down, James and the team are currently working flat-out.

"We are currently manufacturing the bigger parts of the 2017 car," he reveals. "The chassis are being made and they are on schedule. It's still early days. We're not up to quantities yet but the first one is well and truly underway. The second one is probably started at this stage.

"The gearbox is also underway as are other components, both those made in-house and those from outside suppliers. It's certainly going ahead full-on at the moment. We're doing R&D work on impact structures as well and that will be well in time for winter testing.

"From a development side, that's also flat-out, as normal. We've got a busy winter schedule ahead of us. With these new regs, we are paying particular attention to the loads on the car, which will be much higher because the cornering speeds will be that much faster. We therefore need to make sure that structurally, we've missed nothing. Of course, you always want to make sure that's the case, but we haven't got any experience of these cars yet so we need to double-check that we are as robust structurally as we believe we should be in theory. So there's a busy winter test programme.