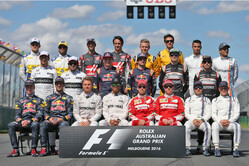 The FIA has issued the 2017 F1 entry list... with just four seats still to be filled.

No surprises that the most noticeable gap is that where everyone expected to see world champion Nico Rosberg’s name alongside Lewis Hamilton, the German having opted to retire just days after securing the title.

Sauber has one vacant seat alongside Marcus Ericsson, while Manor still has two vacancies.

Though previously linked with both Sauber and Manor, Pascal Wehrlein is now looking a little further up the grid, hoping that Toto Wolff will give him the ultimate Christmas present.

Despite using Renault engines, Red Bull will continue as Red Bull-Tag Heuer, the deal having been extended through to 2018.

Sister team Toro Rosso, which switches back to Renault from Ferrari next year, is also expected to re-badge its power units though there is currently no idea as to whose name might adorn the French engines.

Rookies Stoffel Vandoorne and Lance Stroll will race with the numbers 2 and 18, respectively, though the Belgian raced with the number 47 in Bahrain earlier this year.