Alonso: I believe in this project 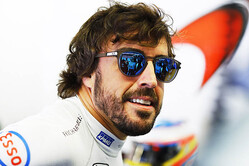 Fernando Alonso has reiterated his commitment to McLaren, telling staff he wants to win the title with them.

While Fernando Alonso seems the obvious choice for Mercedes when it comes to filling Nico Rosberg's seat, it appears the Spaniard prefers to stay where he is.

Despite two difficult seasons with McLaren, the Spaniard who has shown great maturity and humour as he dealt with setback after setback, insists that the McLaren-Honda project is one he intends to see through to the bitter end.

Addressing staff at the McLaren Technology Centre today, Alonso confirmed his commitment to the team.

"I believe in this project," he said. "I'm committed and I want to be world champion with McLaren-Honda. That's my only goal."

While Toto Wolff has admitted that the two-time champion is on Mercedes 'shopping list', the Austrian insisted that he wouldn't interfere, though this clearly hasn't stopped him trying to poach Valtteri Bottas from Williams.

While he has a contract for 2017, it is widely known that the Spaniard could yet walk if he feels next year's car is going to mean another difficult season. Indeed, a few weeks back most would have put their money on this particular world champion retiring before the 2016 title winner.