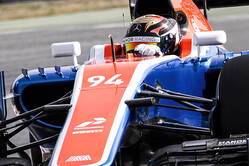 Pascal Wehrlein insists he will benefit from learning why Force India opted for his Manor teammate Esteban Ocon over him.

As he waits on Mercedes decision as to whether he will fill the seat recently vacated by Nico Rosberg, Pascal Wehrlein's other options are somewhat limited.

Fact is, if he doesn't get the Mercedes gig he either faces another season with Manor or a move to Hinwil, neither anywhere near as prestigious as the Silver Arrows.

Having tested with Force India in 2015 twice, in pre-season testing at Barcelona and at the post-Austrian GP test, throughout the summer when there was talk of Sergio Perez heading off, and then Nico Hulkenberg, many assumed Wehrlein would be top of the Silverstone-based outfit's shopping list. However, when Hulkenberg announced his departure for Renault it became clear that his countryman was not even under consideration.

Wehrlein has now revealed that consumed by doubt over the snub he went to Force India in an attempt to try and understand what had gone wrong.

"I wanted to learn from the situation," he told Autosport. "I didn't want to go there and be angry and talk to them in a bad mood."

If he knows the reasoning behind the team's decision however, he not revealing it.

Nonetheless, the German youngster insists he will learn from the experience.

"I will always try my best and do my best to ensure everyone is happy," he said. "In the test something happened, something they were not happy, and that's it. I cannot change it anymore and I can just learn from it and do better in the future."

What on earth could he have done or said? Answers on a postcard.