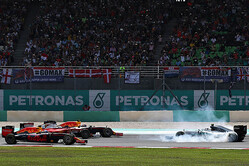 While Malaysia organisers ponder dropping F1, a new deal will see MotoGP remain at Sepang until 2021.

Last week it was reported that organisers in Malaysia are considering dropping the Formula One Grand Prix or at least taking a break, despite a "watertight" contract that runs until 2018.

Amidst claims that this year's TV viewing figures were the "worst in its history", Razlan Razali, chief executive at the Sepang International Circuit, told the New Strait Times: "Maybe it will do Malaysia good to take a break. I think the product is no longer exciting, it's being dominated by one team."

"For the record I still think we should host MotoGP," he added, "Cheaper fee and cost, sell-out crowd and we have riders in Moto2 and 3."

Sure enough, on Sunday, following this year's Grand Prix, which was a sell-out, it was confirmed that a new deal has been agreed which will see MotoGP remain at Sepang until 2021.

"It's not very difficult to convince the Malaysian government to support the Malaysian Grand Prix because we achieve record-breaking crowds every year," said Razali. "MotoGP is no longer just a spectacle for Malaysians, it is now a platform for young Malaysian talent to compete in the world championship and on home ground. I think that is key to the Malaysian GP.

"At the same time, it is not just an agreement between Dorna and SIC," he added, "it's the partnership we have and the support we have for each other; the common interest we have to promote this event better and better every year. We look forward to another five years and I would like to thank everyone who made that possible."

One cannot help but feel that this was a clear shot across the bows of F1, coming at a time where despite hosting fees rising by 10% year on year, ticket sales have declined by around 10% each year since 2014.