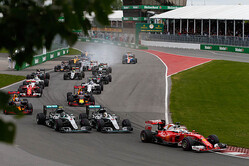 One of three races yet to be confirmed, the promoter of the Canadian GP remains hopeful of a deal for 2017 and beyond.

When the FIA issued its provisional 2017 calendar last month, the Canadian Grand Prix was one of three events still subject to confirmation.

While organisers of the German and Brazilian rounds attempt to sort out their issues, Francois Dumontier, promoter of Canada's round of the world championship, is working hard on agreeing a new deal.

Standing in the way of the deal is the fact that a revamp of the track agreed in 2014, and which should have been completed in time for next year's race, is still underway, with some admitting the work may not be completed until 2019. Should this be the case, a new agreement would have to be reached with FOM.

"It is now being discussed between the mayor's office and Ecclestone," Dumontier, who attended last weekend's race in Austin, told Motorsport.com. "I am pretty confident that they can reach an agreement that will remove the 'asterix' from our race.

"There is a proposal to delay the completion of the work until 2019, and if we get agreement on that then we should be fine," he added.

One of the most popular events on the calendar, with drivers and fans, 2009 was the last time the Montreal event was missing from the calendar. On that occasion it was due to unspecified contractual problems, while 2004's event - which did eventually take place - was placed in jeopardy as a result of the ongoing tobacco advertising row.

With the official calendar due to be issued at the beginning of December, the various parties have a month in which to come to an agreement.