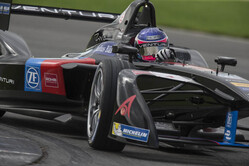 Hot on the heels of the announcement that Mercedes plans to enter Formula E, it has emerged that Niki Lauda, who owns shares in the team, has described the electric racing series as "the worst thing" he has seen and "not motor sport."

Tuesday's announcement made it clear that the new team will be not be run directly by Mercedes or its parent Daimler but by UK company Mercedes-Benz Grand Prix which also operates its F1 team. This is clear from the press release which states that "Mercedes-Benz Grand Prix Ltd (MGP) and Formula E Operations Ltd have signed an agreement by which Mercedes takes an option to enter the FIA Formula E Championship in Season 5. [Formula E chief executive] Alejandro Agag said: "We are delighted to confirm that we have reserved one of our two new entries in Season 5 for MGP."

MGP is owned 60% by Daimler UK, 30% by head of Mercedes-Benz Motorsport Toto Wolff and 10% by the company's non-executive chairman Niki Lauda.

It raises the question of what the company's owners thought of the decision to start the team as in 2014 Lauda was quoted by respected German publication Auto Motor und Sport saying that Formula E "was the worst thing I have seen for a long time." He added that "the cars look like toys; they creep around the track one after the other. For me, this is not motor sport."

The inaugural event in Hong Kong kick-starts Formula E's third season this weekend and will be broadcast on Channel 5 in the UK. Last year the series had just 4% of the cumulative global audience that F1 enjoyed according to research firm Repucom. In the year to 31 July 2015 Formula E's UK holding company Formula E Operations burned up a £43.8 million net loss on revenue of just £14.8 million. In contrast, the latest accounts for its bigger brother Formula One show that in 2015 underlying profits hit £297 million on revenue of £1.1 billion.

It is not clear whether Wolff would be the boss of the Formula E team but he is quoted in the press release stating "we have been watching the growth of Formula E with great interest. At the current time, we are looking at all the options available in the future of motor racing, and we are very pleased with an agreement that secures us an opportunity to enter the series in Season 5. Electrification will play a major role in the future of the automotive industry. Racing has always been a technology R&D platform for industry and this will make Formula E very relevant in the future."

As a 30% shareholder in the team, and as head of Mercedes-Benz Motorsport, one would expect Wolff to want to have some degree of control over it but that could be difficult given the clashes between Formula E and F1 races. However, the way forward could be smoother than we think as Pitpass was told by a well-placed source in the paddock at the Italian Grand Prix that Formula E could become a support series to F1 thanks to the possibility of common ownership.

Last month American conglomerate Liberty Media announced that it plans to take control of F1 in a £3.3 billion buyout from CVC. Liberty is majority owned by American billionaire John Malone who also happens to own a majority stake in Liberty Global which in turn has a 24.5% share in Formula E.

Malone also owns 29% of the voting rights in broadcaster Discovery Communications which in turn holds 8.2% of Formula E and also owns Eurosport, the promoter of the World Touring Car Championship.

It looks like a minefield for competition regulators at the European Commission (EC) who need to approve the F1 takeover in order for it to go ahead. The EC may be concerned that Mr Malone could withdraw, or threaten to withdraw, his backing of the companies he invests in if they don't support F1.

In the worst-case scenario the EC could put the brakes on the takeover or force Liberty Global to sell up its interest in Formula E which could then throw a spanner in the works of any possible plan for it to become F1's support series.

It wouldn't be the first time this has happened. When CVC bought F1 the EC forced it to sell Dorna, the company which controls its two-wheeled counterpart MotoGP. Ironically, the presence of more of the same teams and manufacturers across both series increases the likelihood of the EC having concerns about the F1 takeover.

The risk is that if the same individual or company had an influence in two series in which the same manufacturer or team operates, it could be used to block them from competition by pricing them out of one (F1) and the other (Formula E). This concern is clear from the EC's summary of its investigation of CVC's F1 buyout. Although it forced CVC to sell Dorna, it said that teams were not a factor due to the lack of commonality.

Page four of the summary says "it appears that teams and manufacturers do not generally consider motorcar sports to be a realistic alternative to motorcycle sports and vice versa. A car manufacturer like Renault would not gain any significant commercial advantage from participating in motorcycle sports. Whereas its Formula One title of 2006 directly increased its car sales, as potential clients can associate Renault successes in motorcar racing with its car models, this would be much less the case with a Renault Moto GP prototype motorcycle."

Formula E however could be considered to be a (far cheaper) alternative to F1 so it remains to be seen what the EC will make of the common ownership between the two series and what impact this could have on any possible plan for one to run as a support series of the other. If the Mercedes Formula E plan is contingent on the takeover it could call that into question too.

Of course, the common ownership is not the only hurdle facing Liberty's planned takeover of F1. As Pitpass has already reported, MEP Anneliese Dodds recently wrote to the EC asking it to investigate the circumstances surrounding F1's governing body, the FIA, owning a 1% stake in the sport which it previously agreed to sell up in order to prevent conflicts of interest and thereby bring its rules "into line with EU law." Moreover, the FIA can only cash in its 1% stake, which is worth £33 million, when F1 is sold but in order for that to happen its consent is needed which has also led to suggestions that it has a conflict of interest.

Only time will tell what the EC thinks of all this.