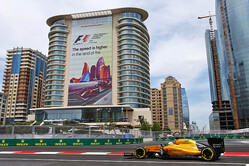 Organisers of the Grand Prix of Europe in Baku are requesting a name change.

Though Azerbaijan is physically and officially in Europe, the very fact that it is two hours ahead of central Paris gives some idea of just how far removed from the sport's heartland the country really is.

Indeed, when the Azerbaijan event was named the Grand Prix of Europe in Baku once eyebrows had collectively lowered and atlas’ googled the big question was, why?

Now officials are seeking to have the event renamed the Azerbaijani Grand Prix to reflect the host nation.

"We hope the next race will be held under the name of the Azerbaijani Grand Prix," said Baku City Circuit marketing and communications chief Nigar Arpadarai, according to Azerbaijan's Trend news agency.

"We successfully held Formula One in the capital for the first time," he added. "Therefore, it is time to link the name of this stage with our country."

Indeed, ahead of the announcement that the event has won best organised race of the year, surely the whole point of paying millions into FOM's coffers to be part of the F1 calendar is to promote one's country.

According to Arpadarai, who claims FOM has approved the name change, the idea behind naming the event the Grand Prix of Europe was to emphasise the country's links to the continent.