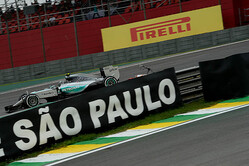 Organisers of the Brazilian Grand Prix have reacted to the FIA's claim that the 2017 event is 'subject to confirmation'.

The calendar issued by the World Motor Sport Council today suggested that three races are in doubt and have yet to be confirmed. They are the German, Canadian and Brazilian Grands Prix.

While there has been doubt over the future of the German race for some time, and various issues including money and Bernie Ecclestone's demands for a major revamp of the Circuit Gilles Villeneuve that hosts the Canadian event, it is unclear what the problem is at Interlagos.

Indeed, reacting to the calendar, and the infamous asterisk against its event, organisers issued a brief statement.

"The Brazilian Grand Prix Organization, took notice, with surprise, of the 2017 F1 WC Calendar which shows the race TBC (to be confirmed)," it read. "There is a contract in place until 2020 every provision of which will be complied with as it has been for the past 45 years."

Though Brazil is suffering a recession, today's 'TBC' has caused surprise in the F1 paddock as the event remains one of the best attended on the calendar and is popular with fans and driver alike.

While Ecclestone said earlier this year that he envisaged the 2017 calendar being reduced to as few as 18 races, Liberty Media, which is in the process of buying the sport has made no secret of the fact that it wants to expand the calendar especially in the Americas.