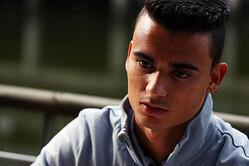 Pascal Wehrlein was in action for Mercedes today as the German team got its first taste of Pirelli's 2017 wet tyres.

The German completed 135 laps of the Paul Ricard circuit in a mule car modified to simulate 2017 levels of downforce, as Pirelli began its second trial of next year’s wider wet tyres - Ferrari having run them at Fiorano at the beginning of August.

Conditions remained sunny with ambient temperatures reaching 25 degrees C, though strong winds made it quite tricky to maintain a consistent level of water on the track between one run and the next.

The test will continue tomorrow, again with Wehrlein at the wheel.