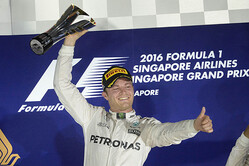 Mercedes driver Nico Rosberg won a tactical Singapore Grand Prix, which kept up its 100% safety car record following a start line incident that influenced the strategy for only a handful of competitors. Singapore is a race that has mostly been won from pole, and Rosberg continued this pattern to move into the championship lead.

Three drivers used the ensuing safety car to make an early pit stop. Red Bull was the only team in the top 10 to start on the supersoft tyre, while the rest used the faster ultrasoft. However, Daniel Ricciardo wasn't able to complete a longer first stint than his direct rivals, negating the theoretical advantage of the more durable compound.

In the closing stages of the race, Mercedes used tyre strategy to get Lewis Hamilton past Ferrari's Kimi Raikkonen and onto the podium with a third stop. Ricciardo also made a late pit stop for the supersoft: at one point taking more than three seconds per lap out of Rosberg to set up a thrilling finale. Nonetheless, the Mercedes driver stuck to his two-stop strategy to seal another win.

Ferrari's Sebastian Vettel started from the back of the grid but worked his way up to fifth at the finish, using a soft-ultrasoft-ultrasoft strategy. Another alternative strategy, using the soft tyre, was adopted by Force India's Sergio Perez. The Mexican started the race on the ultrasoft but changed to the soft under the safety car, making just one more stop for soft to finish in the points after starting well down the order following a penalty.

This week, Pirelli's testing campaign with the wide 2017 tyres continues, with Mercedes testing the wet compounds at Paul Ricard in France from September 21-22 using an adapted car to simulate next year's regulations.

Paul Hembery, Pirelli motorsport director: "Singapore remained one of the most arduous races of the year, for drivers, cars and tyres. We had the unusual pattern of track evolution following a significant rainstorm overnight. From the beginning of the race we saw a number of different strategies, with teams adopting a varied approach to fight for the podium places. One particular highlight was Sebastian Vettel's climb from last, which was helped by a unique and bold strategy, while tyre strategy also dominated the end game thanks to a mixture of tactics involving both two and three tyre changes."

We predicted that three-stop was the theoretically fastest solution for the 61-lap race and this turned out to be the case. Nico Rosberg started instead on the ultrasoft, then stopped for ultrasoft again on lap 16 and finally soft on lap 34.