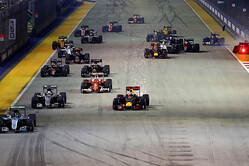 One of the worst side-effects of the buy-out of virtually every sport by broadcasters is the endless hyperbole.

Ever match, game, tournament, fight and race is going to be the biggest and the best, even better than the previous event of which similar promises were made and, needless to say, will also be made about all events that follow.

We do not want to go down that road, and have always done our level best not to. That said, we have a feeling that today's Singapore Grand Prix could be something special.

We came into the weekend with the usual puss from the teams and sections of the media, but suddenly some of it appears to be genuine.

Mercedes is under threat here, Red Bull is very strong, Ferrari could shock - indeed, Sebastian Vettel was left speechless after Q1 - and safety cars could mean any number of other teams and drivers pulling off a real shock... without needing to resort to Nelson Piquet Jr tactics.

On the face of it, Nico Rosberg has a golden opportunity to take back the lead in the title race. Teammate Lewis Hamilton has looked unconvincing all weekend, making needless mistakes as he appeared to overdrive the car. There are some circuits that drivers just don't like, and perhaps Marina Bay is one such track for the world champion.

However, Rosberg cannot take anything for granted, often known to lose races all by himself, the German will be under intense pressure from Red Bull and Kimi Raikkonen. The in-team fight at Red Bull will be interesting, Daniel Ricciardo, on blistering form in qualifying and keen to make up for Monaco, wants his first win of the season, while his precocious young teammate merely wants the opportunity to further assert himself.

Writing this prologue a couple of hours before the race, we can't help but feel that today is going to belong to Kimi. The Iceman has been strong all weekend, and is sure to be the coolest in today's strength sapping conditions.

Not that long ago he was being written off, but in our humble opinion you do so at your peril, Kimi is still capable of winning.

On the other hand, he starts alongside his nemesis Verstappen, so we could see the pair ending one another's chances in the opening moments.

While Vettel starts from the back of the grid, and will not enjoy the benefit of overtaking hot spots as enjoyed by Hamilton at spa, a good strategy and a safety car period could see the German take some serious points.

By the way, if the animal lover was at pains to avoid a couple of errant seagulls in Canada, he had better be on the lookout for monitors lizards during the course of today's race. Verstappen will be able to tell him just how big they are.

Behind the 'big three' we have a midfield pack that has never looked quite so competitive, so tight.

Running its two drivers with different aero packages - Sainz the new and Kvyat the old - the Faenza team, like Rosberg celebrating its 200th Grand Prix appearance - is back on form following the nightmares of Belgium and Italy, and looks more than capable of getting both cars home in the points.

The Faenza team will be in a fierce scrap that includes Williams, McLaren and force India, though the Silverstone outfit's strength is somewhat depleted following Sergio Perez' grid penalties, of which at least one was deserved.

In terms of the battle between Force India and Williams, this isn't hyperbole, this is about constructors' points, the points that decide just how much prize money the team receives come season end.

Promising a significant improvement here, thus far McLaren has been unconvincing. However, both drivers are confident that this will change come today's race. That said, let's hope it wasn't an omen when Alonso's car fell off its jack during pit stop practice earlier this morning.

If Romain Grosjean feels his car is the worst he has driven in a very, very long time, Haas must feel the Frenchman is the most complaining driver it has encountered in a long, long time. While the Frenchman has complained about every single component on the car, Esteban Gutierrez has quietly got on with it, to the point of out-qualifying his teammate.

For Sauber, Renault and Manor this will be another long, and somewhat muggy, couple of hours. On the other hand, with an eye on the intensity of the battles up ahead, and the almost certainty of a safety car, all three teams will be aware that points are possible... much like Monaco.

To add to the fun, Vettel will be right behind the three teams... and we all know how patient he is when it comes to back-markers. And he won't even have the luxury of blue flags.

Tyre options are ultrasoft, supersoft and soft, the Red Bull duo the only drivers in the top ten starting on the red-banded rubber. Pirelli is expecting most drivers to go for a two-stop strategy.

To add to the fun, a very heavy storm last night has washed much of the existing rubber away, leaving the track a lot less grippy.

As thy head out the drivers perform practice starts, for some drivers this little rehearsal is more important than ever.

"Everything is OK, balance is about right," says Button.

Not so for Grosjean who looks likely to be starting from the pits after the team discovered a late issue thought to be related to his brake-by-wire. The Frenchman's weekend just got worse.

As they prepare to head off on the warm-up lap, all are starting on the ultrasoft bar the Red Bulls, Nasr and Palmer, who start on the supersoft, and Vettel who is on softs.

"No one has ever got a one-two finish here," Mercedes Paddy Lowe helpfully reminds us.

As the field heads of, Grosjean is out of his car, his helmet off. His race over before it even began.

The grid forms, Vettel last to arrive for the party.