Hamilton: I can't find a rhythm 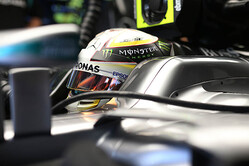 While it isn't quite the nightmare of 2015, it has to be said that Lewis Hamilton has been far from convincing this weekend.

Though he has been on the pace all weekend, he has never looked convincing, and a number of mistakes suggest that he is tending to overdrive his car.

Starting third on the grid for today's Singapore Grand Prix, the Briton admits to being baffled by his lack of form.

"I just haven't been quick this weekend," he admitted to reporters after finishing 0.704s down on teammate Nico Rosberg, who starts from the coveted pole position for the fourth time in five races.

"This is a track where you need a real good rhythm," he continued, "and I haven't been in a rhythm all weekend. I couldn't hook up the laps, I couldn't find grip, which is unusual for me. I will see how it goes. If it goes well, it does. If it doesn't, it doesn't."

The Briton's claim comes at a time the title fight is swinging back in favour of his teammate whose own run of poor form saw Hamilton turn a 43 point deficit to a 19 point advantage. But after Belgium, where engine penalties saw him start from the back of the grid, albeit finishing the race third, came Monza where a botched start gifted the race to Rosberg.

Admitting ahead of this weekend that he feared poor starts could cost him the title, the Briton now appears that there is more to his sudden drop in form.

"I've kind of been on the back foot all year long," he said, "so there's no real difference to me. I'll do the best job I can from there and try and fight my way through, but it's a very hard track to overtake, so you're usually stuck where you are. But there's lots of safety cars at this race so lots can happen during the race."