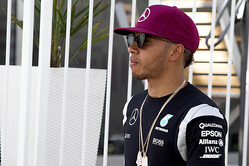 Earlier this season, as Lewis Hamilton encountered a series of issues, Mercedes had to take the unusual step of publicly addressing fans concerns that there was no agenda or bias.

To further compound his earlier problems, at Spa-Francorchamps Hamilton was forced to take a number of engine penalties, leaving him at the back of the grid, thereby effectively penalising him twice.

In Belgium Nico Rosberg took full advantage of his teammate's plight whist a fluffed start at Monza, which gifted the German a second consecutive win, has led to the inevitable grumbles on social media.

With an engine upgrade said to be in the pipeline, one which would fit in with Rosberg's allocation but mean another penalty for Hamilton, Mercedes is aware that there will inevitably be claims of bias again, however Paddy Lowe is convinced the team can maintain total parity.

We're dealing with that all the time," he told Motorsport.com. "One of our big, huge focuses in the team is to work as one, and keep everything absolutely as fair as possible with the drivers, and indeed for everybody to work together for the common interest, which is to get the quickest car on the day.

"So that problem doesn't exist," he insists. "We're geared up for it already. Yes, it's going to intensify as we close in on the final races, but we're already tuned up for that."

Referring to the upgrade which is likely to coincide with the point at which Rosberg takes his final permissible engine of the season, Lowe said there is currently no plan for such a move.

"We'll cross that bridge when we come to it," he said. "We're not actually facing that situation at the moment. In theory it can arise, but I'm sure we'll deal with it in the fairest possible way."

Other than his duelling duo, Lowe, whose team enjoys a 208 point advantage over Red Bull, insists he isn't taking anything for granted.

"I never come to a race with any confidence in anything, apart from that we should go in and do in our best," he said. "As you know in this sport all sorts of things can arise, and you've got no better example than Singapore last year, where we really got it badly wrong."