Hamilton on Verstappen: "Give the guy a break!" 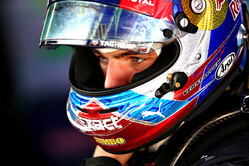 Days after Fernando Alonso jumped to Max Verstappen's defence, insisting that the Dutchman's moves on Kimi Raikkonen in Belgium were within the rules, fellow world champion Lewis Hamilton has gone one step further, calling on fellow drivers, fans and media to cease the seemingly endless Verstappen bashing.

"He has grabbed the opportunity with both hands," the Briton told reporters at Monza. "Give the guy a break, he is 18 years old. What the heck were any of us doing at 18? He has won a grand prix!

"The pressure on his young shoulders is something most people will not be able to comprehend," he continued.

"I don't know what I would have been like at 18 on track, but I would have made lots of mistakes," admitted Hamilton, who made his race debut with McLaren in 2007 aged 22. "I just see a young, talented kid who just seems to have an enormous amount of raw talent. At 18, the maturity hasn't caught up with your ability and that might go faster with some people or slower. Only time will tell."

Asked about the incident at Spa, the Mercedes driver, who has now seen them on video, admitted: "The one where he ran Kimi off, that was an interesting one, but that's just him learning. He is a young aggressive driver.

"We could all go out there and be reckless," he added. "You have to find a balance. I have driven with people in the past where there was a guy in front who was a complete psycho. It was, like 'What the hell is this guy thinking?'"

Sadly, he didn't name them... but that doesn't stop us guessing.