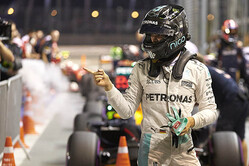 Nico today took his 29th career pole position - his first at the Marina Bay Street Circuit and seventh of the 2016 season so far. Lewis will line up on the second row of the grid in P3. Today's result marks the 150th pole position for Mercedes-Benz power in Formula One. Nico and Lewis have now collected a combined total of 58 pole positions as team-mates - more than any other driver pairing in the history of the sport. Both drivers completed a single run in Q1 and Q2, another two runs in Q3, using UltraSoft compound tyres throughout.

Nico Rosberg: That was a fantastic Qualifying for me - especially on my 200th GP weekend. I think this lap is in my top three of all time. I felt totally at one with the car, which is really rare. I was able to push a lot and couldn't even top that first lap time on my second run. In the past we've seen that in Singapore pole is important, so I'm in the best possible position for tomorrow. We know that there a lot of pressure will come from Daniel in the Red Bull, as he will start on the SuperSoft tyres. This will be a tough battle but I'm quite confident that we chose the right strategy. We can be really proud of how much quality we have in the team. We learned a lot from last year when we were nowhere in qualifying. We've closed that gap and that is very satisfying.

Lewis Hamilton: It's not been my weekend so far. I've not got many good laps out there. Not for any particular reason. I just haven't been able to string it together. People have pointed out turn seven as the problem. But it isn't any more difficult than any other corner on the track. It's one of the heaviest on brakes and quite bumpy but that's it. I had an issue with the suspension not working properly in practice which affected my braking - but we fixed that and in qualifying braking wasn't a problem. Nico did a great job and showed the potential of the car today. I've not really looked at the long runs and I didn't get to do any yesterday. Nico did and, although our setups are slightly different, I don't think I'll be in a bad position. I'll find out tomorrow. I've kind of been on the back foot for most of the year, so it's nothing new to be in this situation. I'll do what I can from here. It's tough to overtake here but I think we've made the right call on strategy. Red Bull will go longer on the SuperSofts at the start - but Nico will probably control the race from the front and make it hard to get by. Time will tell tomorrow.

Toto Wolff, Head of Mercedes-Benz Motorsport: Before the weekend, if you had offered us P1 and P3 on the grid, I think we'd have been very happy to take that result with last year's performance in mind. But after the fact, it's probably a little bit of a shame that we didn't quite manage to get both cars on the front row. It was a really amazing lap from Nico - probably even quicker than we had thought was possible in our predictions. Credit to him where it's due for a great performance. As for Lewis, he hasn't been totally comfortable with the car we've given him so far this weekend and has therefore struggled to find that all-important rhythm you need at this track. It's always a case of finding the sweet spot between the car and the driver and it seems a little bit off so far. Looking ahead to tomorrow, there is still everything to pay for. Red Bull has gone for an interesting tactic with the SuperSoft tyre at the race start. Our starts have been a focus in recent races and we have been working to optimise them - but it's still an area we need to improve. So we can be pleased with this result for as much as it's worth. But tomorrow is when the performance really counts and the points are scored. That's our full focus now.

Paddy Lowe, Executive Director (Technical): First of all, congratulations to Nico on an incredible lap. To be honest, it reminds me of Monza where Lewis achieved something similar - and that's what makes this battle between our drivers so fantastic. They are both able to pull out these phenomenal performances under pressure and keep setting the bar even higher. Congratulations as well to the team for their work so far this weekend. We arrived in Singapore conscious of our relatively poor performance and results last year, and a large effort went into understanding the reasons for this and being stronger this year. We have seen today that, as far as qualifying is concerned at least, we have achieved that. That is a great credit to our engineering team for some excellent work so far. As we know, however, this is an extremely tough race for the drivers, the car and the team, so our attention has turned quickly to tomorrow. We must complete diligently our preparation and see if we can convert strong grid positions into equally rewarding race results.