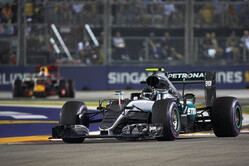 Clearly following Tag Heuer's mantra of not cracking under pressure, Nico Rosberg took victory at Singapore yesterday, under intense pressure from Daniel Ricciardo, to re-take the lead in the championship fight.

Ever since the opening lap crash in Spain, the German, who had started the season with a run of four wins, has failed to consistently convince. In the meantime, teammate Lewis Hamilton put together a run that saw him win six of seven races, turning a 43 point deficit a 19 point advantage.

Benefitting from the Briton's engine penalties in Belgium and a botched start in Italy allowed Rosberg to close the gap, however it is his performance in the intense heat of Singapore which has turned the title fight back in his favour.

On a weekend where his teammate has struggled, Rosberg remained cool throughout. Making the most of his pole position he looked set to be cruising to his third successive win.

However, early in the race came the warning that he needed to manage his brakes, his teammate receiving similar instructions.

Though he appeared to be on top of the situation, his win was put in further doubt when Mercedes, in an attempt to assist Hamilton who was battling Raikkonen for third, opted for a third stop for tyres. Ferrari immediately reacted to the move as did Red Bull.

As Mercedes was about to bring Rosberg in for his third stop, the result of the change of strategy for Hamilton, it became aware that due to an increase in pace from Ricciardo the German could not pit and retain his lead. Consequently he was told to stay out on his older rubber.

Thus began Ricciardo's cat and mouse pursuit of the Mercedes, at one time taking 3s a lap from the German.

However, traffic, and canny driving from the German saw him cross the line 0.488s ahead of the charging Red Bull.

"I've known Nico since 2013 and that is the best Nico Rosberg I have ever seen throughout a weekend since then,” said an ecstatic Toto Wolff, following what might have been a tactical disaster for his team.

“We have the tendency of saying that Lewis has an awesome pace, and this is what we have seen with Nico this weekend," he continued, "he was blindingly fast. He was six-tenths quicker than P2 in qualifying in Singapore, something we are not used to seeing here. And he drove the race in the same way. He had a great start, controlled the pace and on the contrary, Lewis didn't have a clean weekend.

"We have a tendency of talking one up and the other one down,” he admitted. “We have had this for three years.

"Since the two of them have been fighting for the championship, you have seen those waves. I remember talking about Lewis' momentum a couple of weeks ago and suddenly we have this mega Nico weekend, and in two weeks we will see if that changes or stays the same in Malaysia.

"They are so close together in terms of performance one bad weekend is enough and the other has an advantage. It's going to go down the wire," he insisted.