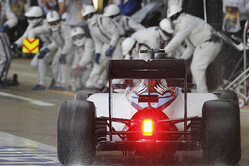 Little more than a week ago the sale of Formula One to American media conglomerate Liberty Media was announced. It came two years after the New York Post revealed Liberty's interest in F1 and three days after Pitpass' business editor Christian Sylt revealed that terms had been agreed with them.

We are just days into Liberty's tenure and talk has already started revving up about a conflict of interest at the heart of the deal and that commitments agreed with European lawmakers have been broken. Sceptics and F1 often go hand in hand but when one of the voices of dissent is none other than the sport's former governor Max Mosley, people should take note.

Praise has been heaped on Liberty from almost all quarters in F1. Drivers and team bosses alike have all come out to say how they think the deal is in F1's best interests and will boost the number of races in the United States. But when one looks into the detail it is hard to see how the status quo would change much.

Despite its name, Liberty is not a media company. It has investments in media and sports businesses just like F1's previous owner, CVC Capital, owned stakes in a portfolio of companies. Liberty is majority owned by billionaire John Malone but the company itself has just £78 million of cash in the bank so anyone who thinks that the sale will lead to billions being poured into F1 could be sorely mistaken. And as for the idea of Liberty fuelling the growth of more races in the US, that seems to be little more than a pipe dream.Although the popularity of F1 lags behind NASCAR and IndyCar in the US it has still attracted the interest of potential race promoters all over the country. In the past five years alone projects have been put in motion to launch races in California, Nevada, New York, Florida and Pennsylvania. Not one has got off the grid so far for one reason - they haven't attracted government funding.

The only F1 race in the US is the US Grand Prix in Austin and it just so happens that it has funding from the state of Texas. Even that has steadily declined from an annual £20 million to £15 million since the race launched in 2012 despite it being one of the most popular on the calendar.

Government funding is at the heart of F1's business model as revenue from broadcasting fees and trackside advertising during races is retained by the sport's rightsholder. This leaves tracks with ticket sales to cover their running costs whilst governments foot the race hosting fee which comes to an average of around £23 million every year. If Liberty could convince governments in the US to part with this kind of cash then maybe it could drive the growth of more races in the country but there is no evidence that it has this kind of clout.

These are the kind of questions that much of the sports media is failing to ask and instead it is not just talking about Liberty as F1's "new owners" but postulating who it could insert to replace F1's boss Bernie Ecclestone. In reality Liberty isn't even in a position to get its feet under the table and the real question the media should be asking is whether it ever will.

To be clear, Liberty hasn't bought F1 yet. What was largely lost in the media frenzy is that Liberty has only bought an 18.7% stake in F1's parent company Delta Topco. CVC has not sold a single share to Liberty so it is still in control of the company. Liberty's investment presentation made it clear that it hopes to take over F1 next year but, crucially, it added that "closing will require (i) anti-trust approval, (ii) Liberty Media Corporation shareholder vote and (iii) certain third party consents, including approval of FIA (F1 governing body)." It is far from a formality.

The Origin of the problem

As is often the case with the business of F1, the origin of the current problem lies way back in the past. Remember when Ecclestone ended up in court in 2013 defeating charges that he undervalued F1 by paying a bribe? That was based on events which took place in 2005. More recently, the sale of Silverstone to Jaguar reportedly hit the buffers due to a veto held by Porsche which was granted in 2008 when it opened a driving centre at the track.

Now we have Liberty's proposed buyout and the problem this time stretches back to 2001 when F1's previous parent company paid £218 million ($313 million) to buy the rights to the sport for 100 years from 2011. It bought the rights from the FIA which will get them back in 2111. In the meantime it has a say in who owns F1 to ensure that the sport doesn't fall into the wrong hands.

Specifically, Clause 8 of the contract for the rights, known as the Umbrella Agreement, states that the FIA's consent is required in order to sell F1's parent company as "any such change of control shall be subject to the prior written approval of FIA Switzerland."

It reflects comments in 2011 from Jean Todt, the FIA's president, who said that "if one day CVC decide that they want to sell the rights... I need to speak with my people in the FIA to give the agreement whether we are happy with the people who will take over or we are not happy."

In 2013 the FIA bought a 1% stake in Delta Topco as part of plans to float the company on the Singapore stock exchange. Ecclestone said at the time that "the FIA gets 1% if F1 floats" and although the float got the red light in the end, due to the poor health of the economy, the FIA had taken up the share option by then. It got it for a bargain basement price.

Contrary to reports, the shares did not come from Ecclestone and this could prove to be a crucial point. In fact, the shares were newly issued by Delta Topco which is controlled by CVC. The transfer authorisation reveals that the FIA was offered the shares for just £0.008 ($0.01) each so it only paid a total of £277,844 ($458,197.34). It was the sale of the century as the shares were worth well over 100 times more than the FIA paid for them and it was in no doubt about that. The transfer authorisation states that the value of the stake was estimated to be £45 million (€54 million) at the time and although it has since fallen from that it still stands at a healthy £34 million ($44 million).

Crucially, the prospectus for the planned flotation of F1 reveals that if it had listed in Singapore the FIA would have been obliged to waive its right to approve a change of control. This is important because F1 didn't float so the FIA still needs to give its approval to the sale.

The transfer authorisation reveals that the FIA's shares can only be cashed in, pro rata, in the event of a sale by CVC and that is exactly what it plans to do as Liberty's investment presentation states that it "has agreed to acquire all outstanding shares of Delta Topco."

This makes the FIA the gatekeeper to riches as if it approves the sale it stands to make a £33.7 million profit on its purchase price of the shares. CVC stands to gain even more as its 38.1% stake in Delta Topco is worth £1.3 billion.

This has fuelled the claim that if the FIA gave the green light to the sale it could call into question the legitimacy of the deal.

In an interview with Sky Sports earlier this week former FIA president Max Mosley was asked if he thought the situation was a conflict of interest. "You could actually say that I suppose," he said. "The thing is that they have to sanction it in the sense they are entitled to look at the purchaser and if it was the head of the mafia or someone they could say no but if it is a reasonable purchaser, a proper businessman, it wouldn't be open to the FIA to refuse. They could be challenged."

However, Mosley added "the principle is that the FIA can get a proper fee for the work they do, looking after Formula One, which they get, but they can't have a commercial interest in any branch of motorsport. That fundamentally was the deal."

The deal he is referring to is the reason that the FIA sold the rights to F1 for 100 years in 2001. It followed an investigation by Europe's lawmaker, the European Commission (EC) which had received complaints that the FIA was biased towards F1. As a result of the investigation the FIA and F1 separated themselves commercially to ensure that they did not break European law. This is why the FIA sold its rights in F1 for such a long time.

The EC's notice about the closure of its investigation stated that "the FIA agreed to modify its rules to bring them into line with EU law... The modifications introduced by FIA will ensure that: - The role of FIA will be limited to that of a sports regulator, with no commercial conflicts of interest... To prevent conflicts of interest, FIA has sold all its rights in the FIA Formula One World Championship."

So, to summarise, the FIA sold all its rights in F1 to prevent conflicts of interest which in turn brought its rules in line with EU law. Now the FIA has a 1% stake in F1 and this could break the agreement with the EC according to Mosley.

The FIA "have one percent of the commercial rights. Now that's arguably contrary to the deal that we did with the Commission back in 2001," Mosley told Sky. "The Commission said to us ‘If you want to be the governing body of all motorsport worldwide, and you want to stop anybody starting a new rival federation - as has happened for example in boxing and various other sports, if you want to be able to do that then you must have no commercial interest in any part of motorsport because you might have an inducement to aid one rather than another.' So it may be that the Commission might come along [now] and say to the FIA ‘You're not allowed [to have the 1%]' but they might not. I've no idea."

It is worth stressing that there is no suggestion of wrongdoing by an entity or person being in a conflict of interest. It is perfectly normal, perfectly common and derives from the circumstances rather than the person or entity it applies to. The FIA has not done anything wrong or acted improperly in any way. Indeed, it is entirely innocent as it took the shares in good faith and it is not the FIA's fault that F1 didn't float.

If the flotation had taken place, the FIA's right to approve the sale would have been waived and there would have been no risk of a conflict of interest. However, this isn't what happened and now there is a conflict of interest which needs to be resolved. It only becomes a problem if the person or entity who is conflicted acts regardless of knowing this. It is believed that the FIA has not yet decided whether to approve the Liberty sale as it recently issued a press release stating that "the Federation awaits further information regarding the proposed terms of the transaction and welcomes the opportunity to discuss with all parties the possible consequences of this agreement on the promotion of the FIA's flagship championship."