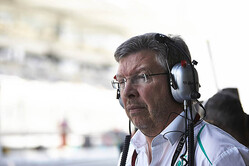 Though not interested in returning with a team, Ross Brawn would welcome a role shaping the direction of the sport.

Ever since Ross Brawn opted to swap the pitlane for the riverbank, the Briton has been linked with a return to the sport, many a team feeling that it would benefit from his vast experience.

However, up until now he has shunned the opportunity admitting that it is the politics that helped drive him out of the sport in the first place.

Yet with racing in his DNA, the man who enjoyed F1 title success with Benetton, Ferrari and the team that bore his name and was to become Mercedes, Brawn has admitted that a role in which he might help shape the sport would be of interest.

Referring to Christian Horner's comments last year that he would be the ideal candidate to help advise on the technical future of the sport, Brawn told the Daily Telegraph: "That was nice to hear from Christian. That's how I would like to be involved in the sport.

"I would never go back to a team," he continued. "I did everything I can in a team, but I would be repeating myself. For sure, trying to help F1 become a better F1 would be appealing. It would be the one thing that could be interesting.

"If you ask me what F1 needs, it needs a plan," he added, "a three-year and a five-year plan. My view is we haven't got the ideal structure for creating that plan and implementing it over time."

Asked if this might clash with Bernie Ecclestone who is working with Liberty Media as it seeks to take the sport forward, Brawn admitted this could be an issue.

"I think they're finding their feet," he said. "They're being very wise and taking their time. They've also got to build their relationship with Bernie, because he's not used to having an owner involved in that way.

"I have no issues with Bernie," he insists. What we have today is primarily down to Bernie's creation. I just got frustrated because my approach is methodical and structured and Bernie's is chaotic and impulsive.

"If those two things ever came together it would be an interesting combination," he admitted. "Sometimes I find those idiosyncrasies, those approaches, amusing. I get round them in that way. I just keep battering at the door until it opens."