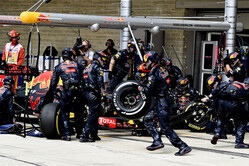 Just weeks after Lewis Hamilton suggested that a 'higher force' didn't appear to want him to win the 2016 title, Max Verstappen heard voices telling him to pit at a time the youngster looked destined for a strong points finish.

Arriving at his pit it was clear the crew was totally unprepared indeed the tools and blankets were lying on the floor with not a mechanic in sight.

From out of nowhere, the crew rushed to service the Dutch driver, reacting brilliantly to the situation. However, shortly after the Red Bull ground to a halt with a transmission issue necessitating a Virtual Safety Car period that was to change the face of the race.

"The lap before I pitted I heard the words 'push hard', and that's what I did," he told reporters. "But then I thought that they might have said 'pit now'.

"Obviously it was a misunderstanding and very obviously my mistake!" he added. "I admit that all was not very clever. It was good that in the end it didn't make any difference."

"It is something totally unusual," said team boss Christian Horner. "He just arrived in the pitlane and said 'I am in the pitlane'.

"We are not very good at fitting tyres when we don't know the drivers are coming in," he continued. "It was a shame for him but ultimately it came to nothing because of the DNF."

Asked about the message Verstappen had heard, the Briton said: "He hadn't heard anything that lap, it was the previous lap. He had been told to push, which was basically to close the gap back up to Nico because we were going to try to have an undercut. It was even the lap before, and he had driven past the pits. So it sort of came from nowhere."

Ironically, in a move that will come as no surprise to anyone who has run an F1 related poll where a Verstappen is among the nominees, the youngster was voted Driver of the Day by fans on the official F1 website.