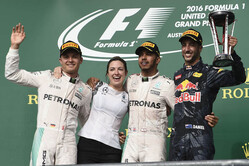 Mercedes driver Lewis Hamilton won his fourth United States Grand Prix in Austin with a two-stop strategy as predicted, after a race that developed into an extremely varied tactical battle. Six different strategies were seen in the top 10, with the leaders closely matched on race pace from start to finish, despite the big variations in tactics. Four drivers in the top 10 used all three compounds during the grand prix, but Hamilton was the only one in the top 10 to opt for a soft-soft-medium run plan.

All three compounds were seen at the beginning of the race, with only the two Mercedes drivers and Max Verstappen's Red Bull starting on the soft tyre in the top 10, after scoring with this compound there Q2 best time yesterday. Rosberg was the only one of the frontrunners to choose the medium tyres for his middle stint before using this compound again for his final stint. Both Hamilton and Rosberg made their final stops under the virtual safety car with 24 laps to go, which could have influenced their choice towards the medium tyre to get to the end.

Most drivers completed two stops, although before his retirement Ferrari's Kimi Raikkonen completed a three-stopper and also Vettel opted for the same choice with just three laps to go. Both Saubers, plus Toro Rosso's Daniil Kvyat, stopped just once.

The race was run in warm and dry conditions, getting underway in track temperatures of 34 degrees: similar to conditions for qualifying yesterday.

Paul Hembery: "With six different strategies within the top 10 positions, tyre strategies were working hard. The virtual Safety Car also made an impact notably on Daniel Ricciardo's race, and allowing some drivers taking advantage of it to make a final pit stop and gain track position."

We predicted that two-stops was theoretically the best solution for the 56-lap race and this turned out to be the case. Lewis Hamilton started on the soft, then stopped for soft again on lap 11 and finally medium under the virtual safety car on lap 31.