Magnussen "will be ready for Monza" 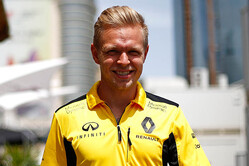 Kevin Magnussen is determined to race at Monza despite his high-speed crash during the Belgian Grand Prix.

Following initial checks at the Spa-Francorchamps circuit, Magnussen was taken to hospital for further checks to a cut ankle following his massive crash at Raidillon in which he hit the tyre barriers after losing control of his car.

Such was the force of the impact, his headrest became detached from his car, a fact that will concern the FIA, while the tyre barrier was so badly damaged the race had to be eventually red flagged.

Having been given the thumbs-up at the local hospital, Magnussen took to Twitter to assure all that he was OK.

"Thanks for all your messages folks!" he tweeted. "On my way home now with a sore ankle but will be ready for Monza," he added, together with a series of thumbs-up emoticons.

"He went to the medical centre and then to the hospital in Verviers," team boss Fred Vasseur told reporters, "they did an X-ray and scan because of the impact but everything is OK."

Vasseur confirmed that his physio was with him throughout and he too feels the Dane will ready to race next week in Monza... which is more than can be said of his car.

Like everyone else, Vasseur saw the incident on his screen and pending a full investigation is unwilling to speculate on the cause of the accident.

"I had the feeling he had huge wheel-spin on the kerb," said the Frenchman, "I don't know why, whether he was too much on the kerb or not."

Asked if it was down to driver error, Vasseur was quick to come to the defence of his driver.

"No, I would never blame a driver for this and I don't want to speak about this," he said. "We need to know exactly what happened and then we will talk about it."

With Monza just a few days away, the Dane will need a new chassis, engine and gearbox, such was the force of the accident.