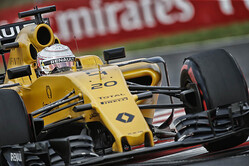 Renault Sport Formula One Team put in its best qualifying performance of the season at the Belgian Grand Prix. Kevin Magnussen set the twelfth quickest time of the day and Jolyon Palmer the fourteenth* best at the most technically demanding circuit of the year.

The result is the first time the team has put two cars through to Q2 since the season-opening Australian Grand Prix.

*Jolyon will start P13 after penalties applied further up the grid.

Kevin Magnussen: "Today we found a lot more pace than expected and that's a nice surprise, obviously. My lap wasn't even perfect; I really locked up in Turn 1 and lost a lot of time. I thought it was over, but pushed for the rest of the lap and got a decent time in. Even though we are P12, I think there was a little bit more in it and that's encouraging for the race tomorrow."

Jolyon Palmer: "I am pretty happy with that performance. It's the second race running that I've been in Q2, but we can be especially pleased with this one as yesterday was tough and we turned it around. Having two in a row shows that Hockenheim wasn't a one-off and we are making genuine progress. There are a lot of unknowns for the race tomorrow as the temperatures are sky-high and tyre degradation is worse than expected, but we have some advantages. Everyone in the top ten is starting on used tyres whereas we have a new set in hand. I'm now really looking forward to the race and trying to crack into the top ten if we can."

Today was the team's best qualifying performance. How would you sum up the effort?
Nick Chester, Technical Director: The team put in a very good performance; it was the first time we have got two cars through to Q2 since Australia. We qualified in twelfth and fourteenth and will line up twelfth and thirteenth after penalties, which is our strongest starting position of the season so far. It shows that we've made progress with the car and the package now seems to be working well.

Where have the improvements come from?
NC: We looked competitive in Hungary before the summer break, and then again in Hockenheim, so we are showing genuine steps forward. This weekend we started relatively slowly but all the major improvements have come from making adjustments to the balance throughout the sessions. We have been methodical in our approach and the performance has come from making relatively small changes.

We have some cars out of position behind us - will you take this into account in the strategy tomorrow?
NC: Not in particular. We expect to be racing Haas and Scuderia Toro Rosso so we'll be concentrating on them and their game plan, rather than anything Hamilton or Alonso may be doing.