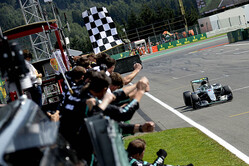 Mercedes driver Nico Rosberg won an incident-packed Belgian Grand Prix from pole, which was characterised by a lengthy red flag period at the beginning of the race.

All three available compounds were seen at the start of the grand prix: medium, soft, and supersoft. Hamilton and Alonso started the race from the last row on the most durable medium compound, and took advantage of the chaos at the start to move into the top five by the time the race was red flagged. Tyre changes are allowed during a red flag period, effectively handing all the drivers a 'free' pit stop. This benefitted drivers who started on the supersoft tyres most, as the softest compound available was well into its opening stint when the red flag came out, in order to allow barrier repairs to be effected. Six drivers took advantage of the red flag to make a tyre change, including the top three finishers.

At the re-start, most drivers chose the soft compound, although race leader Rosberg was a notable exception on the medium. Rosberg completed his final stint on the medium to win with what was effectively a two-stop strategy: the same number of stops used by Red Bull's Daniel Ricciardo in second.

Temperatures remained quite high on race day, albeit slightly cooler than they had been over the two preceding days, with 29 degrees centigrade ambient and 39 degrees track temperature at the start. This too affected tyre behaviour.

Paul Hembery: "It was an action-packed race where we saw a wide variety of strategies right from the start - with all three compounds seen on the starting grid - which were further influenced by the racing incidents and red flag period. Nonetheless, Nico Rosberg won with two tyre changes, as we had predicted, thanks to the medium compound proving to be especially effective in the unusually high track temperatures seen at Spa all weekend, which made tyre management particularly crucial. The top eight adopted tyre strategies that were all slightly different, including the impressive performances from Lewis Hamilton and Fernando Alonso, who raced their way up from the bottom of the grid using alternative strategies."

Truthometer: We thought that two stops would be the winning strategy, but the short safety car period followed by the red flag revised most predictions. Nonetheless, Rosberg won with two tyre changes as expected: he started on the soft tyre, changed to the medium under the red flag and then made his final stop for the medium again on lap 26.