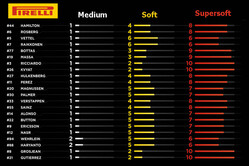 Whilst most drivers are opting for the same tyre sets as their teammate at next week’s Russian Grand Prix, the Mercedes and Williams duos are taking a noticeably different approach to Ferrari and Red Bull.

The event in Sochi marks the fourth time Pirelli has supplied the medium, soft and supersoft compounds, and whilst most drivers have opted for just one set of the medium, team choices in terms of the softer compounds are divided.

Meanwhile, the Red Bull pair have opted for ten sets of the supersofts - the same selection as Haas - and Williams nine.

Only Manor is taking more than one set of medium tyres to the semi-permanent track.