Wolff urges sport to hold off on rule changes 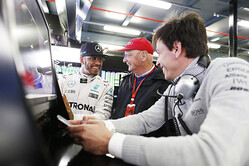 Toto Wolff has called on F1's powers-that-be to consider holding back on introducing major rule changes next year.

As the raft of new rules aimed at making the sport faster and more exciting look like finally being agreed, Wolff has urged the sport to consider stalling the move, claiming that at a time the sport is entertaining the fans a new formula might turn them off again.

"We are having an ideal situation with great racing and three great races in a row now," said the Austrian. "Are we capable of reacting quickly enough and acknowledging that and reverting to regulations which seem to be OK now? I don't know.

"Even if it is uncomfortable for the commercial rights holder that Mercedes have been running away with lots of the races and two championships, the longer you keep the regulations stable the more the performance is going to converge between everybody, and this is what is happening now," he insisted. "The gains we are making are smaller because the curve flattens out and the others are making bigger steps."

Indeed, just as Mercedes mastered the new formula, introduced in 2014, from the outset, Wolff believes the 2017 changes could see one team come out on top leading to several more years of the sort of domination that has turned off fans.

"Somebody else, or us, is going to run away with the championship next year because it is new regulations and everything starts from the beginning.

"There will be more downforce which you won't see just on pure lap time, and less overtaking because the wake is much more extreme," he warned. "There is nothing to be sold on that. There is no selling proposition within the regulations in my opinion. We should just leave it alone. We don't have the advantage we had last year but the racing is great and it will become even greater if we leave the regulations alone."

Whilst one can see the logic in what he is saying, following those "three great races" Mercedes enjoys a 53 point lead and nothing we have seen thus far suggests that dominance is under serious, maintained threat.