Red Bull could test its alternative to the Halo device at the forthcoming Russian Grand Prix.

Thus far, the Austrian team's version of the Halo device has only been seen in artists' impressions rather than in the flesh, whilst Ferrari debuted a mock-up of the Halo during pre-season testing.

Speaking in Shanghai however, as the FIA seeks to introduce the Halo in time for the 2017 season, Christian Horner has admitted that Red Bull could try its driver protection device at Sochi later this month.

"We're going to test the canopy solution over the next week," he told Sky Sports F1. "Static testing, we're going to fire a wheel at in on a plinth to see how it withstands it. 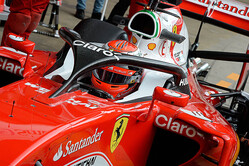 "If that goes OK, we may put it on one car very briefly in Sochi," he continued. "We will see how the testing goes over the next week.

With the FIA insisting that a device is introduced next year, Charlie Whiting claims there isn't time to do the necessary testing on the canopy, whereas the Halo, the brainchild of Mercedes and Ferrari is much further down the line.