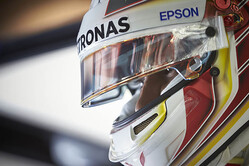 Lewis Hamilton's Chinese Grand Prix weekend got off to the worst possible start after his team opted to change the gearbox on his car. The move followed damage incurred during his first lap clash with Valtteri Bottas in Bahrain.

The Briton was first to reveal the news, taking to Instagram he wrote: "This weekend is going to be tough. I will start with a five-place grid penalty due to a gearbox change but because of you guys I feel energised, motivated, and confident that we can regain ground lost."

The move was subsequently confirmed by his team which took to Twitter.

"The gearbox of Lewis Hamilton's F1 W07 Hybrid sustained damage in Bahrain which required a physical inspection for full assessment," confirmed Mercedes. “Having done so, the decision has been taken to change the gearbox rather than carry any risk moving forwards.

"Of the next 4 tracks in the normal cycle, Shanghai is the best place to make the change and take the resulting grid penalty," the team continued. The Shanghai International Circuit has good overtaking opportunities, so plenty of chance for Lewis to get the HAMmer down!"

The current rules dictate that a driver must use a single gearbox for six consecutive events, and as a result of the early change the highest grid place the world champion can start from on Sunday is sixth.

Having seen teammate Nico Rosberg win the first two events of the year, Hamilton will be keen not to lose further ground to the German.