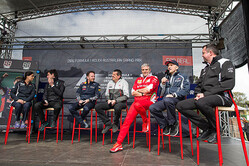 Teams win out over FIA and Commercial Rights Holder as qualifying reverts to 2015 format in time for China.

Despite a lack of official word on the matter sections of the media jumped the gun this afternoon, announcing that qualifying for the Chinese Grand Prix (and beyond) would revert to the 2015 format.

And whilst there was no official word, even from the official F1 website, Red Bull and Ferrari took to social media to break the news.

"Unity is the only way to overcome difficulties", tweeted Ferrari, whilst above a picture of a jubilant, pumped up Daniil Kvyat, Red Bull proclaimed "When you hear about #F1 quali".

Shortly after, the FIA issued an official statement, confirming that after just two races its controversial new format has been dumped and an alternative shunned as all eleven teams showed an unheard of unity.

"At the unanimous request of the teams in a letter received today, Jean Todt, President of the FIA, and Bernie Ecclestone, commercial rights holder representative, accepted, in the interests of the Championship, to submit a proposal to the F1 Commission and World Motor Sport Council to revert to the qualifying format in force in 2015," read the FIA statement.

"This proposal, if approved by the F1 governing bodies, will take effect as from the Chinese Grand Prix and will apply for the rest of the season.

"Jean Todt and Bernie Ecclestone welcomed the idea put forward by the teams to have a global assessment of the format of the weekend for 2017."

Ecclestone and Todt will be incensed by what is an obvious climb down, a situation not helped by Ferrari and Red Bull's rocket starts off the grid to reveal the news on social media.

Both Todt and Ecclestone fear the engine manufacturers and teams have too much power, but previously, certainly in the Briton's case, 'divide and conquer' usually appeared to work. Not this time around.

The teams - whose principals are seen here preparing for a celebratory Hokey Kokey following their victory over F1's toxic twins - have shown that unity can succeed, leading to a rare victory, and leaving Todt and Ecclestone seething having been the driving forces behind this debacle in the first place.

On the other hand, one way or another there is sure to be retribution, one can only dare to imagine what dastardly form this might take.