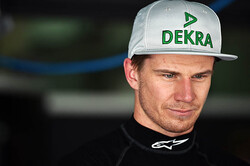 Nico Hulkenberg has been handed a three-place grid penalty following the incident in Q2 in which the session had to be red flagged after his left-front wheel fell off.

Following an investigation by the race stewards, during which they heard from team representatives and examined video evidence, it was deemed Hulkenberg was released in an unsafe condition, a breach of Article 28.13 (b) of the FIA Formula One Sporting Regulations.

The 3-place drop means he will start from 13th on the grid.

The incident happened late in Q2, so late that officials opted not to re-start the session, a move which meant a number of drivers were unable to try and improve their times and get through to Q3.

Ironically, Hulkenberg had already posted a time good enough to get him through to the final phase, however he was unable to take part in Q3 as his car was still out on track.

A number of drivers were clearly frustrated at the news Q2 would not be re-started, most notably Fernando Alonso, who expressed his exasperation with a series of moans.