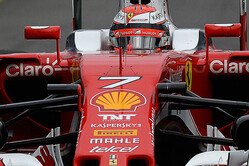 Ahead of today's second session, the air temperature is 26 degrees C, whilst the track temperature is 45 degrees. Furthermore, the sun has come out to join us.

Following this morning's session Fernando Alonso was seen by medical officials and has been given the all-clear to continue driving this weekend. However, he has been told that he must inform them of any "abnormal symptoms".

The big talking point following FP1 is the tyre failures that affected Felipe Massa and Kevin Magnussen. Pirelli insists that none of the failures was due to its tyres but rather the cars. Indeed Williams later cited its wheel rims as the cause of its failures whilst Renault is still investigating Magnussen's 'issue', which is thought to be suspension related.

A late issue for Nico Rosberg, which saw the German switch to 'limp home mode' was found to be an ignition fault. Teammate Hamilton also suffered a "locking" issue which twice saw him spin in T11.

The session, which was interrupted by two red flag periods - the result of those tyre failures - saw Rosberg quickest, ahead of Hamilton, Vettel, Ricciardo and Raikkonen.

Only two drivers tried the supersoft rubber - which is making its debut in China - and that was the McLaren duo.

Three drivers failed to post times earlier, Massa and Magnussen and also Gutierrez who was side-lined by an electrical issue.

The lights go green and Grosjean leads the way, followed by Raikkonen, Ericsson, Vettel, Wehrlein and a whole host of others, all keen to make up for this morning's stoppages.

Grosjean posts 40.908 to get things underway, ahead of Ericsson, Wehrlein and Gutierrez.

TV camera picks up on Wehrlein who's headrest has come loose. However, for reasons known only to himself he doesn't pit. Meanwhile, Haryanto has reported a problem with his headrest also.

Gutierrez heads back to the pits with flams from underneath his car, his brake appearing to be on fire. The mechanics are soon on the case with their extinguishers, whilst Gutierrez leaps from the car.

It's all happening today.

"We're still investigating what happened on Kevin's car during FP1," reveals Renault, "and that means he won't be running in this session."

"A full investigation has concluded that none of the deflations for Williams and Renault in F1P were tyre related," confirms Pirelli. "Separate technical issue."

Excursions at T1 for Hamilton and Perez.

Bottas, who is on a long run on the medium rubber, really having to fight his car.

A big wobble for Raikkonen in T1 as the thrills and spills continue.

As Vettel finishes an 11 lap run, Raikkonen asks; "Do you really want me to keep going because this really is ****?"

Vettel, who was on the mediums showed good pace, by the end of his run his times were similar to those of Raikkonen on the soft.

More and more drivers now switching to the red-banded rubber.

On the supers, Ricciardo posts 38.143 to go third, 1.010s off Rosberg's pace. Verstappen and Sainz go fifth and sixth, ahead of the McLaren duo.

A 38.527 sees Hulkenberg go fifth, as Vettel heads down the pitlane on a set of supers. The German, who has yet to try the red-banded tyres this weekend, is currently twentieth (42.673).

With an almost clear track, Vettel posts a PB in S1, before going quickest in the two remaining sectors, crossing the line at 37.005 to go quickest by 0.128s.

As Rosberg runs wide in T6, Raikkonen heads down the pitlane on the supers.