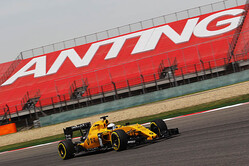 As speculation filled the Shanghai paddock following Felipe Massa's two tyre failures during this morning's opening session, when Kevin Magnussen appeared to suffer another failure - to the same left-rear corner of his car - there were fears that perhaps it was the tyres that were to blame.

However, Pirelli was quick to investigate, insisting that none of the failures was due to its tyres but rather car issues.

Sure enough, whilst Williams revealed that Massa's punctures were the result of a set-up issue related to new vanes in the rear brake ducts, Renault eventually discovered the root cause of its issue.

"Kevin didn't get a lot of running because of a rear suspension failure," said technical director Nick Chester. "We know the cause of the failure and will have modified components for tomorrow."

"I had a suspension failure that led to the tyre going," added Magnussen. "It was fairly easy to control as I was going straight, not in a corner, so I just lifted.

"This isn't shaping up to be the straight-forward weekend I was wishing for," admitted the Dane, "but we'll get there regardless."