Magnussen: I was expecting to score points straight away 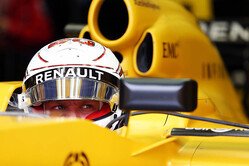 Whilst Renault didn't expect its return to F1 as a team to be easy, it surely didn't expect the issues that have frustrated it in the opening two rounds of its latest campaign.

Though Jolyon Palmer finished just outside the points in Melbourne, just ahead of the Dane, in Bahrain the Briton didn't even make it to the grid whilst this time it was Magnussen's turn to finish so tantalisingly close to the point scorers.

In Australia the Dane suffered a first lap puncture, whilst in Bahrain he had to start from the pitlane following a questionable penalty meted out for a weigh-station misdemeanour on Friday.

When asked whether his team is overachieving, bearing in mind that it has only just returned to the sport as an entrant, the Dane admitted: "It's difficult to say whether we are overachieving or not. I don't know what the real expectations were but we knew it was going to be difficult, but I was expecting to score points straight away. Maybe not big points, but I think we should have scored points, especially in Australia if we didn't have the puncture on the first lap.

"So it's difficult to say whether we are overachieving or not," he continued, "but we knew it was going to be difficult to begin with and then we will see what progress we will make.

"I know we have stuff coming later in the season, how much we have will be interesting to see. We don't know at the moment so will work with what we have, wait for the upgrades and see what they bring.

"Our biggest weakness at the moment is qualifying," he admitted, "in the race we are generally more competitive so that's what we need to work on at the moment.

"It's a long-term plan and we knew this was going to be a transition year where everything is being ramped up again. Patience is important at this time but we'll get there.

"It's a really nice atmosphere in the team," he admitted, "and you can really feel how everyone is exciting about the backing from Renault. It's a team that's been struggling for a few years, so now everyone's got that boost and everyone is happy. So the atmosphere is good in the team. We have a good car, it's not fast enough yet, we know that."