Abiteboul: Only the first race but a hugely encouraging start 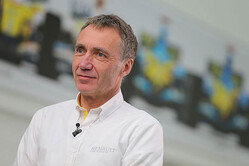 Cyril Abiteboul: Melbourne was a great opening race for Renault Sport Formula One Team. There were many positives, but the most important was that we showed we can race on track. Both drivers delivered exactly what we wanted. It was superb to see Jolyon defending hard against the opposition, especially as that meant a lot of airtime for us! Kevin fought hard to come back from a tough start and overtook late in the race. Furthermore, the car looked great on circuit - we have received a lot of positive feedback - and the team worked well together, leading to a lot of interest from a number of quarters. It's only the first race but it's been a hugely encouraging start. We can look forward to Bahrain with a lot of confidence and enthusiasm.

How happy were you with your first race as Racing Director in Australia?
Fred Vasseur, Renault Sport Racing, Racing Director: It was a great feeling and I would like to thank the team for the opportunity for a smooth, good weekend! At the end of the Grand Prix I had the feeling that we had been working together for a long time. For sure we need to improve, and we know we have a lot of work ahead of us, but so far I am very happy with how things are going and the collaboration between Viry and Enstone.

How would you review Australia? Did the team achieve its aims for the first race?
FV: It was a very positive start to the season. We aimed to get to the end of the race and we got there with two cars. The end result was not excessively flattering, due to the number of incidents that did not go in our favour, but the pace at the end was good, comparable to Force India and not far from Williams, which is encouraging for the team and a good basis to build on. We need to maximise our qualifying form so we can take advantage of this strong race pace but that will come I am sure. If it wasn't for the restart I think we could have scored points as we were in a great position, but that's life. We know where we are and what we need to do to achieve what we want.

What did you learn about the car?
FV: We didn't have any major issues, it was good to drive. The first target was to finish the race and we achieved it with both cars. You always have to think about what was the objective when you start and if someone told me in Barcelona that we would fight in the race with a Force India and a Williams I would have laughed! It's a good surprise.

How did you think the drivers performed?
FV: I think we can be very pleased with the drivers. Jolyon had a very good debut. It was a shame for Kevin, but he built back up and was strong at the end of the race. It's a bit disappointing we did not score points, but we did not truthfully expect to be in the points in Melbourne given the late start we had to the project.

What areas will you work on for Bahrain?
FV: We don't have to be focussed on one thing, but work on every side of the business: engine, chassis and drivers. We need to work as a team to move forward. But it is very encouraging to start like we did in Australia, we now need to keep the momentum going.

Did Melbourne reach your expectations in terms of performance from the R.S.16?
Bob Bell, Technical Director: Overall, I think it was a very credible start. The team gelled very well together and we were able to meet the technical and sporting challenges of our first race as a new team. We had a largely trouble free weekend, which was positive as we were able to go through our run programmes and get the best out of the car. We got the most out of the new qualifying format, which is a great credit to the team and its ability to think on its feet. In the race, we looked quicker than you might have expected from qualifying and we were able to manage the performance well. Kevin was unfortunate to get a puncture so early on but he recovered well, while we couldn't have asked for more from Jolyon. Overall it was pretty good. We didn't score any points, but we are eighth in the championship - first of the people not to have any points! - and I think for a first race as Renault it's a credible position to be in.

What did you learn about the car in Melbourne?
BB: The car behaved as we expected. We had ironed out any problems in testing or knew how to fix them so we came to Melbourne prepared. In qualifying we were a little better than expected but the pace of the car in the race itself was good. We looked after the tyre wear very well and in race trim the car behaved itself on short and long runs. That's a great baseline and you can add real performance when you have that. We also brought a prototype front wing to Melbourne that Kevin used and it appears to have lived up to expectations. It will be on both cars in Bahrain.

Did the race in Australia highlight any areas for improvement?
BB: We will obviously be approaching development on two fronts: engine and chassis. In the first half of the year we will concentrate on the engine and have a normal development programme for the chassis. We will have the standard aero developments from race to race, as everyone will do, then have the complex mechanical items that will come through when we get into the European testing programme. I think we have a credible plan to advance the car but obviously we have to balance what we want to do next year versus our aspirations for this year.

Where do you think Renault Sport sits in the order at the moment and what do you think is possible by the end of the season?
BB: I think we need to consolidate our understanding of where we sit in the rankings and, once we know that, we can sit back and consider what is realistic for us to achieve by the end of the year and how we drive development to do it. We have a solid understanding of the car, we don't have to work hard to understand performance problems, so now it is more a case of going back to base, reviewing, and then finding a clear route.

What can we expect in Bahrain given that it's a very different type of circuit?
BB: I don't think we've seen anything at Barcelona or Melbourne that is worrying. Barcelona is pretty indicative of standard aero levels and mechanical grip so we haven't seen anything that concerns us for the major tracks. Naturally we would like to repeat the form we saw in Australia, and maybe sneak into the tail end of the points if we can.