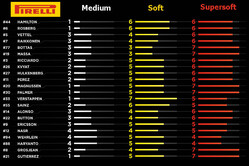 Pirelli has announced the number of tyre sets and compound choices made by each driver for the Bahrain Grand Prix.

The total number of sets that can be used during practice, qualifying and racing remains 13.

For Bahrain, Pirelli has nominated the medium and soft of which one set must be used at some point in the race.

In addition, Pirelli has nominated the supersoft for Q3, of which one set must be retained for the final phase of qualifying. This set will be given back to Pirelli after Q3 for those who qualify in the top 10, but the remaining drivers will keep it for the race - as is the case currently.

The remaining 10 sets can be chosen by each team, from the three compounds nominated for the race weekend, each driver free to make his own choice.