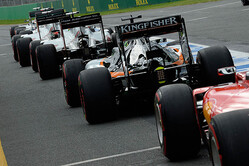 Following a meeting of team bosses in Melbourne ahead of today's Australian Grand Prix, the sport will revert to the old (2015) style qualifying format for the second round of the season.

Yesterday's session was widely condemned as confusing and anti-climactic, with drivers doing the exact opposite of what was intended.

Whereas the controversial new format was intended to produce more action, following a frantic start there was actually less, the chequered flag at the end of both Q2 and Q3 waved to an empty track.

Fans, drivers and their teams were clearly confused and frustrated by the new format which was rushed through despite warnings that it would not work.

The embarrassing climb down comes at a time the sport is already losing fans and sponsors weary of one-team domination in addition to an unpopular new hybrid formula.

With all eleven teams agreeing to the decision to revert to the old format - a rarity in F1 - the change will need to be rubber stamped by the F1 Commission if it is to be in place by Bahrain.

"For once there was absolute unanimity in the room," Red Bull's Christian Horner, who yesterday said the sport owed fans an apology, told Sky Sports.

"Everyone recognised what happened yesterday wasn't right, so the unanimous decision was to go back to what we've had for the last few years from the next race."