Whiting confident radio (and pit board) cheats will be caught 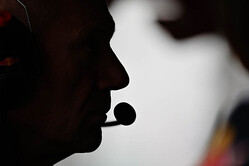 Ahead of the clamp down on radio communications between teams and their drivers, some had suggested that it would be impossible for the FIA to monitor every conversation simultaneously, whilst others suggested that special codes would be devised.

Not so, insists Charlie Whiting.

Such is the litany of things that cannot be communicated, it is probably easier to reveal what can, though that's precious little. Indeed, the FIA has issued a guideline outlining twenty-four permitted messages.

According to the FIA's Sporting Regulations; "at all times the car is out of the garage with the engine running and the driver on board (with the exception of any time the car is in the pit lane on the day of the race prior to or between reconnaissance laps)", there can be no information passed over which might assist the driver in improving their lap time, optimising the performance of their cars or understanding the performance of their tyres.

"We will hear every single message, I am absolutely sure of that," insisted Charlie Whiting as he addressed the media in Melbourne.

"With coded messages, we have to be a little bit careful," he admitted. "We could, for example, if we have some suspicion that a message is rather odd, we could then look at the data from the car to see if the driver did anything in response to that message.

"Then, at the next race, if we hear the same message and notice the same switch change, then we will build up a little knowledge. We want to make sure the driver is driving the car on his own, and not being told."

The ban on the passing of such information isn't limited to team radios however, pit-boards will also be monitored.

"We have a camera looking at all the pit boards," he revealed, "so if we see something unusual then we might have to ask why.

"I think they will do their very best to try to get as much information as they can to the drivers, but I just hope that they continue to do it in a legal way."