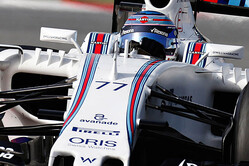 Valtteri Bottas, who qualified 11thfor today's Australian Grand prix, has been handed a five-place grid penalty after his team elected to change the gearbox on his car.

The change, which was before the required six consecutive events expired, was deemed a breach of Article 23.6a of the 2016 Sporting Regulations.

The Finn, who declared yesterday's qualifying session "disappointing" - he wasn't the only one - admitted that he struggled for grip from his tyres but felt he could still have a good race from 11th. He will now start 16th.

His penalty is the second to be meted out this weekend, Rio Haryanto having been demoted three places for causing the collision with Romain Grosjean in the pitlane in FP3.