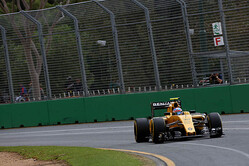 Renault Sport Formula One Team opened its Formula 1 qualifying account with Jolyon Palmer setting the fourteenth and Kevin Magnussen the fifteenth fastest time today at Albert Park. Both drivers proceeded through Q1 before succumbing to the knockout countdown and being eliminated during Q2.

Kevin Magnussen: "We didn't think we would be as strong as we were today, we hadn't expected to get out of Q1 and actually we got both cars through. My lap wasn't perfect, there was more to get out of the car so that is encouraging. It was frustrating that things didn't go our way in Q2, we had traffic which meant we didn't get a chance to set a better time, but qualifying is the same for everyone and at some point it will work out in our favour."

Jolyon Palmer: "It was a pretty busy qualifying, obviously as it was the first one with the new system. It really built up and we were going quicker and quicker all the time so you had to make sure you kept your head above the water and not get knocked out. We're happy to be in Q2; we didn't really expect much more. I hadn't done many laps in the dry here so I was trying to build up to it a little bit and then on the last lap, I knew I had to give it everything. It was enough to make Q2 so happy days!"

How was qualifying for the team?
Alan Permane, Trackside Operations Director: We are reasonably happy especially as the session went very smoothly for us execution-wise. Both cars ran reliably and as we're starting in the midfield tomorrow there's every chance to score points. If we do achieve points on the team's debut, especially after the tough winter we've had, it would be fantastic so that's absolutely our aim.

How do you feel both drivers delivered?
AP: Jolyon spent particular time in the simulator last week to prepare for this circuit as it's a new one for him. He's really enjoyed being out there and that's showed; he's done a great job so far, especially given that it's his first GP weekend, a new circuit for him, and there are new qualifying rules. Kevin unfortunately was in a bit of dirty air from traffic on his Q2 lap but really, we were on scrubbed tyres and fighting each other.

What was the challenge of the new qualifying format?
AP: We had to approach it with a completely different mentality compared to the old system and we spent a long time working out what was best to maximise our performance. We felt we were going to be on the Q1 cut-off so it worked out pretty well for us today.

What are the considerations for tomorrow's race?
AP: The weather should be similar to today, with less chance of rain but still cool and overcast. Everyone is likely to be racing on tyres one step softer than previous seasons so there is a good chance we'll see more pit stops than in the last two years.