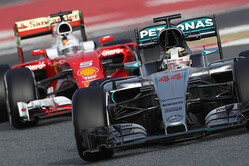 At the end of the first week of testing in Barcelona, many dismissed the initial set of stats issued claiming, quite rightly, at that at that stage all they showed was that Mercedes has reliability, and how.

A week later and we still don't have any meaningful insight into the true pecking order as, particularly on fast runs, we are unsure of fuel loads etc. Then there is the fact that most cars will be sporting new parts in Melbourne, based on data accrued in Spain.

Furthermore, the ultras that filled six of the top ten best times are not really suited to the Circuit de Catalunya.

In fact, most of our questions won't be answered until FP3 on Saturday in Melbourne, while Qualifying, with its complicated new format is aimed more at shaking up the grid than seeing who is outright fastest.

Whatever your opinion of the stats, one simply cannot ignore the clockwork reliability of the Mercedes, nor the fact that on softs they were up there.

Then again, speaking of softs, there is the fact that Kimi Raikkonen produced a 1:23.099 on the yellow-banded rubber, just 0.244s off the quickest time of the entire test, posted by him of ulras.

Consequently, we know that Ferrari is close to the Mercedes, maybe ahead on pace, but how close. And then there's reliability.

As ever, Williams was giving little away, however reliability was good, as was pace, whilst both drivers claim that slow corner speed in much improved on 2015.

Then comes an intriguing midfield, where we have the genuine prospect of Toro Rosso heading Red Bull, whilst Force India, not forgetting its off-track distractions, is looking good.

Renault has admitted that it faces a difficult year, but free of the financial shackles that held back Lotus, the Enstone outfit is sure to improve as the season progresses.

Having not introduced its 2016 contender until the second test, there's little to be read into the stats, though the Swiss outfit will be keen to improve on a highly disappointing 2015.

Of course, one of the big questions is how will McLaren fare? Despite a number of issues the Woking team certainly has a decent number of laps to its tally, but not enough.

However, Honda appears to have learned from the disaster of 2015 so hopefully we will see progress over the months ahead and Fernando and Jenson given a car worthy of their talents.

Anyone who thought bolting a Mercedes in the back and partnering with Williams was going to put Manor in line for podiums was seriously deluded. The Banbury team is another that faces a long, hard season in the toughest school of hard knocks, but with friends like Mercedes and Williams it can only improve.

After an impressive first week, it was back to earth with a crash for Haas, the American team suffering a number of issues. Hopefully it has learned from the tests, not only in terms of reliability, but learning to walk before it runs, certainly as far as over-confident soundbites for the F1 media is concerned.