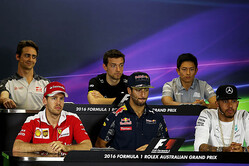 Daniel Ricciardo, let's start with you. Here we are, 20 years on from the grand prix moving across from Adelaide to Melbourne, tell us about what a buzz it is for you to showcase your sport once a year here and what it means for the fans in Australia?
Daniel Ricciardo: It's exciting, definitely. It's exciting to be racing again in general. But to come here... (coughs)... pardon me, it's emotional, jeez! It's cool, you know. Every year that I've been here now there's still an awesome buzz. It's something that will definitely never get old as long as we keep coming here, as long as I'm racing. So yeah, Melbourne is great, especially when the sun shines. Everyone is super enthusiastic by the race here and there are always cars on track - woken up this morning by the two-seater. They really fill up the schedule and the fans definitely get their money's worth.

Your long run performance in particular looked strong during the tests in Barcelona. Do you feel you will be able to compete more perhaps in the race than in qualifying, certainly in the early part of the season at least?
DR: yeah, I think the long pace will be better for us. The short runs are going to be a little more... I think in qualifying we're probably not going to be as strong but long runs we should be good. Let's see what happens. I don't know, time will tell. I've been answering these questions all week and you can't really answer them at the end of the day. On Sunday everyone will see where the real pace is, including us.

OK. Let's turn to Esteban - welcome back. Thirty-eight grands prix contested in your two previous seasons in Formula One. You were in the points for Sauber in 2013. How has your period as a Ferrari reserve driver made you a stronger competitor?
Esteban Gutierrez: Well, it was very interesting with this guy in front of me [Sebastian Vettel]. I think in general as an experience it helped a lot in my career being able to observe many things from a different perspective and obviously getting very hungry to get back racing and finally reaching this moment, starting what I love most, to be racing, to be in a race seat.

How has the build up to the first race gone for Haas? What are the biggest challenges for a star-up team in the sport?
EG: I think the biggest challenge is to really integrate ourselves as a team, because the flow of communication in general... everything is new, there are a lot procedures that need to be defined. I think Barcelona, as a test, was a great experience for the team, a lot of character building. We had some difficult moments, some other good ones and all in all it's where we need to focus - to be efficient and very dynamic for the development of the following races.

Rio, coming to you, 23 years old, from Indonesia, one of three rookies in the field. First Formula One driver, more importantly, from Indonesia. Let's start with that. What's the response been like and how does it feel to be a pioneer?
Rio Haryanto: Yeah, there's been tremendous support back home. Obviously to be able to compete in Formula One is a great thing. I'm very proud and I'm sure the whole nation are proud too to have me in Formula One.

You won races in GP2 and GP3 during your apprenticeship for this opportunity. What are your expectations for this season with Manor?
RH: I'm new to Formula One so there are a lot of things to learn. My expectation is to try to learn as quick as possible and to try to build a good relationship with the team and we'll see how it goes in the races?

Ok, coming to another rookie, Jolyon Palmer - welcome. Twenty-five years old, GP2 champion in 2014, you've also waited a few years for this opportunity. What's the best thing about now becoming a Formula One driver?
Jolyon Palmer: Well, racing! It was a bit frustrating last year having a year on the sidelines after GP2, but I learned a lot and it makes it even sweeter to be here racing again. I was out here last year seeing what Melbourne's all about, did the track walk, was ready to go, but of course as a reserve driver you rarely get the chance. So looking forward to getting behind the wheel for at least an FP2 and an FP3 as well this time.

Well, it was Lotus last season, the team has now become Renault, so what should we expect from you and this team this season?
JP: Well, it's difficult to say at this moment. Taking over from Lotus there were a lot of difficulties over the winter, everything was a little bit late. The expectations are pretty low and this year is just about building a foundation. So I think we need to build a solid base and the team has a lot of potential to move forward in the next few years.

Let's turn to the world champion - Lewis Hamilton, two-time Australian Grand Prix winner, four time polesitter here in Albert Park, Melbourne. Lewis, you said recently there's still more to come from you this season. What are you looking for?
Lewis Hamilton: I don't remember saying that, but OK...

Let's presume you did!
LH: Cool. That's good. I hope there is! I don't know, I think you are always searching for perfection, always learning, always growing, both inside and outside the sport. I'm just looking forward to that journey. I don't know what's to come. I don't when I'm going to be growing or more, but I guess that's the same for every single one of us, so that's what I'm excited about.

There are quite a few more variables this year due to the regulation changes. Looking at the team radio restrictions in particular, do you think that's something that could actually play to your strengths - given that you guys are all going to be much more on your own now? Is that something that could work for you?
LH: We're all in the same boat. Some of us will handle it better than others. I don't particularly see there being much of be a problem. But is it good? I don't really know but we'll manage it the best way we can.

OK. We've heard from the champion, let's hear from one of his main challengers, Sebastian Vettel, 2011 Australian Grand Prix winner, three-time polesitter here. Sebastian, you know what it takes to win in Formula One, do you and Ferrari have enough to trouble Lewis and Mercedes this year?
Sebastian Vettel: I think we have. Obviously, the question is whether we are ready in time, but we are on a good track, we are making progress, we did so last year, I think we did a step over the winter, but as I said, whether it's big enough or not I think we need to wait for the first couple of races and see. But for sure our target is to turn things around, but going into this season I don't think it's a surprise when I say that Mercedes is still the favourite but, as I said, we try to become the favourites in the future.

It's not hard to see where the problem has been, qualifying has been Ferrari's weakness in recent times, when fighting you and Red Bull in those days and more recently Mercedes - only five poles in the last six seasons, seems astonishing really. So has the team put any particular focus on qualifying pace and unlocking that qualifying pace with this car to give you the tools you need to fight on Sunday?
SV: Well, usually qualifying pace is all about raw pace so I think by trying to make our package quicker, make our car quicker, our engine stronger, we enhance our chances also in qualifying to do well. I don't think there is a big secrete behind it - usually in qualifying, as I said, it's all about the raw performance of the car and we know that we are still a little bit behind. We have been last year and obviously we try to be a lot closer this year, how close, I don't know, I don't have an answer... yet. But we have a plan; we know what we want to do; we know where we want to go, so bit by bit I hope we improve and we'll be in a better position very soon, with more pole positions under our belt.

(Abhishek Takle - Mid-Day) Question to Lewis. Mercedes has ran a lot of miles in testing. From a drivers' point of view would you have preferred to do some more performance running to feel the ultimate limit of the car?
LH: Definitely. Of course, the performance runs are always the most fun, the long runs are, kind of, long. And less exciting. But we did what we had to do and I guess we went into the testing with a goal of achieving 800km a day. We didn't actually think we were going to do it so perhaps in hindsight we would have shifted our running. But at the end of the day it suited us perfectly.

(Flavio Vanetti - Corriere della Sera) To Sebastian, could you describe what could be the point of strength of the new car in the season, and would it be a surprise if you are not as close as you expect to the Mercedes?
SV: Well, we've worked very hard. Obviously the project of this year's car started very early so I think it is definitely a big improvement, big step forward overall. Obviously from the outside it's easy to see the main differences but I think especially on the inside we've done a very, very nice job and it allows us to be, first of all, quicker from the start and also have more chance of improving throughout the year. So that's good news. Whether it's good news right from the start, I don't know. As I said earlier, I don't know yet. I hope so. We know that our challenge is very, very big, we know that Mercedes in the last two years have built a very, very strong and solid platform for the whole package. Not just the engine but also the car has been very, very strong, in particular last year, and I think it is quite difficult to start the next season with a worse car than you had before. So we know the bar is high, but we're pushing, pushing very hard.

(Jon McEvoy - Daily Mail) Lewis, I was wondering, after we saw the video of you riding a bike and filming as you were going along, whether you feel you have any responsibility to, as an example to others, not to do that? Or maybe not...
LH: Not particularly, no. I don't really have much of an answer for you unfortunately.