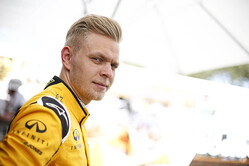 The Renault driver failed to stop for weighing during FP2 when signalled to do so by the red traffic light, indeed the driver continued to his pit where work was carried out on the car.

The Stewards, having received a report from the Race Director, heard from Magnussen and a team representative, deemed Article 29.1 of the Sporting Regulations had been breached and ruled that the Dane must start Sunday's race from the pitlane.