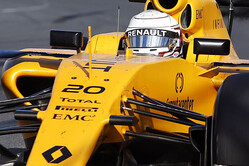 Renault Sport Formula One Team has qualified in nineteenth and twentieth for the Gulf Air Bahrain Grand Prix after both drivers did not progress through Q1 at the Sakhir International Circuit. Kevin Magnussen completed only a solitary qualifying lap, as he will start from the pit lane due to a penalty for missing the weighbridge in yesterday's second practice session, whilst Jolyon Palmer struggled with car balance.

Kevin Magnussen: "I only had one qualifying lap this session as we are keeping our new tyres for the race, and the field is quite close where we are at the moment. Without the penalty we would have approached qualifying in a normal fashion and I think we would have had been able to qualify as high as we did in Melbourne. Looking at our pace, we could achieve a result in the midfield tomorrow but it's a long race and a lot can happen. We will go into the race and we'll do the best we can. I want to enjoy it and hope for some good surprises!

"As we know, I will start from the pit lane as a penalty for not stopping at the FIA weighbridge in FP2. I saw the red light to indicate the need to stop, which actually was for Daniil Kvyat but in fact the same light was also for me, and that's what I misunderstood. I didn't know that you could have two cars called in at the same time. When I saw Daniil [Kvyat] pulling in at the red light, I slowed down in case they'd wave me through but they didn't. In fact they wanted both of us. It's done now, it happened, and let's focus on getting ready for race day."

Jolyon Palmer: "The team did a good job; we avoided the first drop and operationally, I think we have a sound understanding of qualifying. We gave it as good a shot as we could but in the end the pace wasn't there. Our race pace was a lot better than our qualifying performance in Melbourne so hopefully the same situation is being exaggerated here. I'm aiming to have a strong race getting as far up the order as possible. It's easier to overtake here than it was in Melbourne so we'll give it a good go. Anything can happen."

Talk us through both drivers qualifying session.
Alan Permane, Trackside Operations Director: It wasn't a great session for us. Kevin already had a penalty - starting the race from the pitlane - so we needed to do one lap with him, which we did cleanly, and then save as many tyres as possible to maximise his chances in the race tomorrow. Unfortunately, Jolyon didn't have a great time today. He struggled in FP3 so we made some set-up changes before qualifying, however he still looked like he was having a hard time with the car. We will thoroughly look through everything this evening to figure out what it was as he seemed more comfortable yesterday.

Was today's qualifying session tough for the team?
AP: We knew we'd face some tough times this season as a result of how late this project was started. Nobody at the team wants to qualify near the back of the field so clearly that's not our objective. We have potential to move forward in the race. We are not scared of the hard work that it will take and everyone at Enstone and Viry are working very well together. We look forward to making progress and seeing our hard work start to bear fruit with better performance and grid positions.

What is achievable tomorrow?
AP: It's a tough race here in Bahrain and there's a lot of tyre degradation. Tyre management is key and it's an area we are reasonably strong on so we'll do everything we can in the race to move the cars up the field. We are putting our heads down and are working hard and, for tomorrow we hope to be as ready as possible to deliver as solid a race as possible.