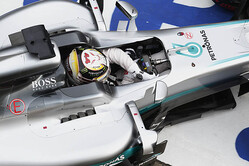 From the moment Mercedes announced it was changing the gearbox on his car, thereby incurring a 5-place grid penalty, Lewis Hamilton knew he faced a tough weekend in China. However, he met the news with a smile, insisting that he would relish the challenge of battling with championship rivals at the start of the race.

However, further technical issues in Q1 on Saturday left the Briton with the prospect of fighting the Manors, Renault and Saubers on Sunday, as opposed to his teammate, the Ferrari, Red Bulls and Williams.

Despite a first lap pit stop following a clash with Felipe Nasr, not to mention running over Kimi Raikkonen's discarded front wing, and a subsequent strategic mistake by his team which meant the Briton made one more pit stop than necessary, not for the first time this season, Hamilton was able to salvage a lot more than many expected, and by race end was in with a chance of sixth.

Nonetheless, the Briton is aware that if he is to retain his title, as well as raising his own game he will need a little more help from Lady Luck.

"There's a long, long way to go, lots can happen," he told reporters. "It is just I don't have any more jokers available.

"It was a pretty horrifying race," he admitted, "but there were some good experiences, there was some good overtaking.

"There are lots of different emotions and thoughts going through my mind as I see the season start the wrong way. But this is a part of motor racing. This is a part of the journey. These experiences bring us closer, make us stronger, myself, my mechanics, my engineers.

"As I'm talking right now, I definitely don't feel the dark cloud I've had over me in the past," he insisted. "Of course it's a trying time. I got a good start, there was great overtaking... I can still overtake! There's lots of positives to take from today. I ultimately wasn't able to show all my ability in terms of pure pace because of the damaged car. I'll go away, come back. We fell this weekend. We'll get up and try harder in the next one."

Asked how he felt, Hamilton's reaction was somewhat akin to Sebastian Vettel's reaction to Daniil Kvyat in the podium ante-room, when the Russian asked the German what had happened at the start.

"How do you expect me to feel?" barked Hamilton. "It was a horrifying race.

"It doesn't feel any nicer than it did back then," he continued, referring to 2014 when (again) teammate Rosberg enjoyed a better start to his season. "If anything it probably feels worse because it's just been one negative after the other."

However, on hearing the gap to the German is 36 points, he smiled.