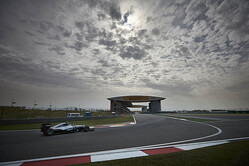 Nico claimed his 23rd career pole position - his second at the Shanghai International Circuit and first of the 2016 season. Lewis suffered a problem with the MGU-H during qualifying that could not be resolved during the session and prevented him from completing a timed lap. Nico completed two runs in Q1 (Intermediate / SuperSoft), one run in Q2 (Soft) and two runs in Q3 (SuperSoft).

Nico Rosberg: It's great to have my first pole of the year. It's always best to be able to start your race from the front and I'm very happy to have that opportunity again. Of course, it's not good that Lewis' car broke down and a shame that we couldn't battle for pole. We definitely need to investigate this as a team but, in any case, I'm sure he will fight his way through the field tomorrow. I made a few mistakes on my first effort in Q3 but my final lap was pretty good. Saying that, Kimi said he made a mistake on his last lap, so with that in consideration I don't believe the gap is as big as it seemed on the timesheet today. On Friday the Ferraris were on the same level as us, so we must be prepared for a strong challenge from the red cars. In the race we could see some surprises. There will be a lot of different strategies, so there's a long way to go yet. But I'm feeling good in the car and looking forward to a battle.

Lewis Hamilton: Of course, it's disappointing not to get out there today. It was going to be a tough weekend anyway with the grid penalty. But these things are sent to try us. No-one wants it easy - at least I know I don't. We might be in the mud right now - but we'll dig our way out. We've got a great car and the team are doing a great job. There are areas we can improve but it's still early in the season and I know we'll get there. It's important that nobody lets their head drop. The best thing we can do is learn from it and move on. I'm sure the guys are just as gutted as I am - but what will be, will be. We win and lose together, so we'll work hard to figure out what happened and try to make sure it doesn't happen again. The positive news is that you can overtake here and the car is quick, so hopefully we can get it fixed for tomorrow and have a good race. I've been in this position before. I came from the back of the grid to the podium in Hungary two years ago, so anything is possible. The tyres don't last as well here, so it's perhaps not as simple as it was in that race. But, of course, I'll give it everything I've got to try to get back up as far as I can. We'll at least get into the points and then I'll see what I can do from there. It's never over until it's over...

Toto Wolff, Head of Mercedes-Benz Motorsport: It was a really bittersweet day for us. Nico did a monster lap in Q3 - he saved it all for his final run and really did a fantastic job to put the car on pole. But I'm sorry for Lewis. He had an uphill battle with his gearbox penalty and that became a mountain to climb after he wasn't able to do a timed lap during qualifying. It was interesting to see that the old qualifying format actually delivered a pretty mixed-up grid today: Daniel Ricciardo will be starting from the front row and hopefully he can make his car pretty wide, because we definitely didn't see the full pace from the Ferrari drivers in Q3. There will be a mix of tyre strategies at the front, with Nico starting on the Soft compound, those around him on SuperSoft, and Lewis charging from the back. There will be plenty to keep an eye on tomorrow afternoon. The first key point will be the start and we have seen already this season that the new rules are making things much more variable from race to race. There will be lots of opportunities to do something different on strategy, so I think we should expect an action-packed afternoon.

Paddy Lowe, Executive Director (Technical): A very eventful qualifying session. We erred on the side of caution with an exploratory first lap on the intermediate tyre. But, as it turned out, the track was almost entirely dry from the outset - with the exception of two patches along the start / finish straight. During that initial out lap, a problem unfortunately occurred on Lewis' car which we later identified as a failure of the MGU-H. It's a shame for Lewis and we apologise to him for setting his weekend back. With one car remaining, we used the SuperSoft to get Nico through an unpredictable Q1 session and then ran the Soft for his first run in Q2. The logic here was to then have the Soft as a hoped-for race tyre in the event he could pull out a good enough lap to make it into Q3. He did that in impressive style, which stands him in good stead for tomorrow. In the Q3 shootout, Nico made a few errors on his first run but put together a fantastic lap on his second, taking a well-deserved pole. It will be an interesting race tomorrow, with Nico on a different compound to the cars around him and Lewis starting from the back. We still remain hopeful of getting both cars on to the podium, so that's the target.