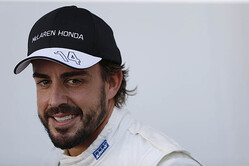 Our race started strongly - both drivers got away cleanly, and Fernando ran solidly inside the top 10 after the first round of pit-stops. Then, as the race started to fragment chaotically after the Virtual and actual Safety Car period, our drivers held on more resolutely than most. Having fitted fresh rubber only a handful of laps before the Safety Car had been deployed, the team opted to keep both drivers out. That meant that Jenson faced an uphill struggle to prevent faster cars from passing him in the closing laps. As for Fernando, however, his brake temperatures began to soar after his second pit-stop, and the team made a call to clear debris from his brake ducts (a stray tear-off visor was once again discovered) and - usefully - fit a set of Option tyres.

As a clutch of drivers were issued with penalties for pit-lane speeding, and a handful more conspired to tangle with each other, we found ourselves taking our first double points finish of the year.

Fernando Alonso: "This was a very good race, and fifth position at the finish is a nice little present for the whole team, particularly as we're not as competitive as we'd like right now.

"On the calendar, there are a handful of circuits where we expected our performance to be better - Monaco, Singapore, and here in Hungary, so we knew we needed to make the most of today. Critically, we did just that: it was a chaotic race, and we took advantage of every opportunity that came our way.

"These points are a good way to send the whole team into the summer break, but we need to further maximise our chances in the second half of the season.

"This hasn't been an easy weekend for anybody in Formula 1 - the minute's silence for Jules [Bianchi] before the race was very emotional, and it was very tough to get in the cockpit straight afterwards. But, today, we respected Jules and we respected the sport."

Jenson Button: "Fernando did a great job today. Fitting the Option tyre for the final stint was the right decision for him; I didn't stop for tyres under the Safety Car whereas pretty much everyone around me did. That decision made it very difficult for me, because my used Primes were pretty old by the end of the race, and there were plenty of faster cars around me running fresher Options.

"Still, it was a fun race, and it's great to get points ahead of the summer break. The accidents and penalties certainly helped us, but we still did a good job out there today.

"This is a step forward for us, but we'll need to take another step if we're to repeat this sort of result. Equally, the next two races - at Spa and Monza - will probably be difficult for us, but it's good to see we're making progress."

Eric Boullier, Racing director: "Yesterday afternoon, despite our cars having qualified only 15th [Fernando] and 16th [Jenson], owing to unreliability problems, I said publicly that much better race performances were within our compass. Sure enough, today we saw exactly that come to pass.

"Granted, we benefited from a goodly degree of attrition ahead of us, and clearly our team didn't build its illustrious reputation on fifth places and ninth places, but, nonetheless, the 12 world championship points we scored today represent a buoying fillip as we pack up and head off on holiday for the midsummer shutdown.

"The first half of the 2015 season has been an extremely challenging one for all at McLaren-Honda, but we've supported and sustained one another throughout, and we'll continue to do exactly that as, working as hard as it's humanly possible to do, we gradually claw our way back to the front. And, lest we forget, our drivers have been magnificent both on- and off-track, today and every day. It'll take time to get to where we want to be, we know that, but we'll get there; that I guarantee.

"First, today we saw a truly great race, which must have been hugely entertaining to watch for spectators here at the Hungaroring as well as for viewers in their homes all over the world. As such, it was a fabulous advertisement for Formula 1, which remains a magnificent sport, despite our occasional tendency to be critical of it.

"Second, I think we can be very proud of the way we all joined together this weekend, almost as a family, remembering and honouring Jules, whose absence many both here and in the wider world feel so acutely.

"Third, I want to send a message of solidarity to our dear friend Aki [Hintsa, McLaren's doctor], who was recently diagnosed with abdominal cancer. Stay strong, mate, and keep fighting the good fight. We're all rooting for you.

"Fourth, I want to say a big thank-you to the entire staff of McLaren and Honda, not only here in Budapest but also in Woking and Sakura, who have worked so tirelessly for so little reward thus far. Have a great break, guys; you really deserve it; success will come, believe me.

"Fifth, and last, but far from least, I want to pay tribute to our team's many fans all over the world, who are the most loyal and passionate anywhere. Guys, your unwavering steadfastness is massively important to all of us, and we hereby publicly salute you. Truly, you really do #BelieveInMcLarenHonda."

Yasuhisa Arai, Honda R&D senior managing officer - chief officer of motorsport: "The temperature today was significantly lower than for Friday's and Saturday's practice sessions, which changed the condition of the track drastically, so it was a difficult race. Furthermore, there were many incidents that made the race very hard to read, but we were able to bring both cars home in the points thanks to some brilliant driving from Fernando and Jenson.

"The settings on both the cars and the power units were solid, so this race was important for us in order to prove their worth.

"During such an eventful race, our drivers' talent, the excellent pit-work and the quick thinking of the engineers shone through. They kept their heads down and pushed, and I'm thankful and happy for the good result."