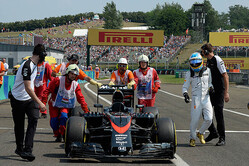 As if confirmation were needed that he hasn't quite lost total patience as his nightmare season continues, Fernando Alonso drew wild applause from the Hungaroring crowds after pushing his stricken McLaren up the hill into the pitlane in arduous heat, such was his desire to get back to his garage and hopefully continue in Q2.

Shortly after however, realising that he faces another long, unrewarding Sunday afternoon, and many more to follow as testing restrictions and lack of (obvious) progress from Honda continue to hamper his efforts, he admitted that the frustration is taking its toll.

"I love motorsport, all categories, but Formula 1 is not as exciting as it was in the past, at least to me," he told reporters, "not to drive the cars just two or three seconds faster than a GP2 car.

"Right now, there is huge motivation and a fantastic project that I am in with McLaren-Honda," he continued. "My first go-kart was a McLaren-Honda replica and I am in a real McLaren-Honda, so I am enjoying this process of getting competitive starting from zero. But with no testing, with these tyres, with these limitations, with the calendar for example of next year, there is the temptation for other categories… that is true."

However, his frustration with F1 clearly goes beyond the problems he is experiencing this season.

"It was more fun before but I don't think it is because we have more sensors or more information now," he said. "Before, we had some freedom in terms of testing and in terms of improving the car as well.

And that is the opinion of a two-time world champion, a three-time runner-up, arguably one of the finest talents to grace the sport... it is not a man influenced by the negativity of the media.