It's the meedja wot done it! 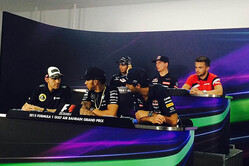 Two weeks after Lotus CEO Matthew Carter blamed the media for all the negativity surrounding F1, even to the extent of claiming that Bernie Ecclestone, rather than constantly knocking the new formula and describing it as "sh*t", had been influenced by the media.

"He reacts to what is written in the press," said Carter, defending the hapless F1 supremo.

Now, as Lotus continues its crusade, appearing to see the media as only marginally less contemptible than IS, deputy team principal Federico Gastaldi has laid in to it again, blaming it for the fact that many of today's drivers appear devoid of personality.

Not so, insists Gastaldi, it is the media to blame.

"I understand what Emerson's saying but I know that we as a team don't do anything proactive to stop our drivers from saying what they think," he said. "The drivers themselves are free to decide to say what they think, but they are talking in a very different world from when Emerson was a driver.

"Now if you say anything even slightly out of the normal it's repeated, misreported, analysed and regurgitated across all forms of media and I think many drivers have taken a wise approach to this; the less controversial you say, the less time you have to spend answering questions about it! This is part of the reason why drivers have evolved into sounding like politicians when asked many questions. They want to drive, not spend hours discussing their opinions on whether Kim Kardashian should appear on the front of Rolling Stone magazine."

Ignoring the fact that most drivers are constantly shadowed by a team PR person who records every single word in order that what is said cannot be "misreported", the fact is that it is the image of the team and its sponsors - existing and hoped for - that matters most.

Most Thursday (driver) press conferences are a waste of time with drivers saying little of importance at a time when, due to the sheer number of journos present and the fact that the session is televised, they are free to get anything off their chests.

Then, as recently as Silverstone, we saw that team principals - with the exception of Vijay Mallya - are unwilling to say anything that might be even slightly perceived as controversial or damaging to the cause.

Next Lotus will be blaming the media for all that nonsense with phantom investor Mansoor Ijaz.