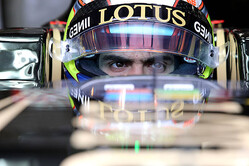 Lotus F1 Team experienced a rather mixed start to its British Grand Prix weekend with Pastor, Romain and Jolyon all out in action at Silverstone today. In the morning session, a clutch issue curtailed Pastor's running and in the afternoon Romain suffered from a rare off meaning much of his session was spent in the garage waiting for his car to return. Pastor ended the day as the fastest Lotus F1 Team driver, setting the eleventh quickest time in FP2 with a 1min 36.164secs lap.

Jolyon ran through a programme of aero, set-up and tyre performance evaluations in the morning session. Pastor's FP1 was cut short by a clutch issue. The second session saw further tyre evaluation and long runs, with Pastor completing the bulk of the programme after Romain went off. Pirelli's hard (orange) compound tyre was used in the morning session, the hard and medium (white) in the afternoon.

Romain Grosjean: "I can't say I expected to be cleaning my car during the course of the practice session, but when the car came back into the garage I wanted to help my crew to get it ready to return to the track. It wasn't an easy afternoon on track as we struggled to get the tyres to work the way we would like them to with the different particularities that the circuit presents. We haven't had time to go over the data yet, but certainly will be working on rectifying what's been niggling us to get ready for tomorrow's qualifying session."

Pastor Maldonado: "It felt very slippery out there today. The car showed good potential; it's definitely there, but we still need to work on the balance for high speed corners against slower ones, so we can improve on getting the best out of the tyres. The harder compound is challenging for us, as we have seen all season, although the track is improving a lot lap by lap and there is definitely still grip to come."

Jolyon Palmer: "I was very happy to drive in front of my home crowd. It was really special to be driving a Formula One car on a nice, sunny day at Silverstone. The session started off well for me, the first run was clean and then we tried something different on the set-up but it didn't work, so the car was a real handful to drive after that. It was a bit of a mixed day for me and the team but we've clearly got potential for better things tomorrow."

Nick Chester, Trackside Operations Director: "Today showed that we need to find a bit more grip from the car. It was a mixed day for us. Pastor had a decent session this afternoon after his car suffered from a clutch issue in the morning; P11, however, is not quite as quick as we would like. Jolyon had a productive morning, so between his morning and Pastor's afternoon - combined with the good weather conditions - we were able to complete the day's programme. Romain lost track time with his off in FP2 but was able to get back in the car later in the session and completed some useful running on the medium tyre."